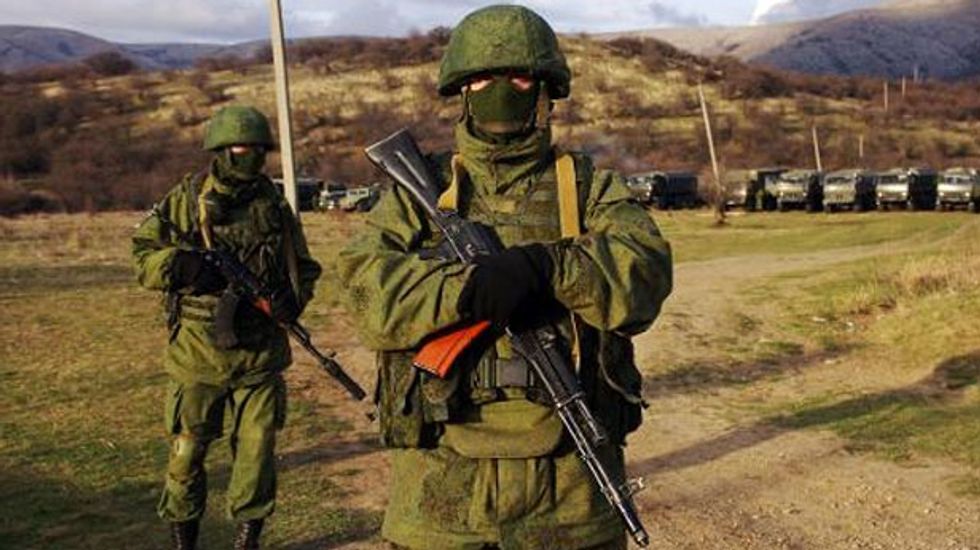 "Almost 100,000 soldiers are stationed on the borders of Ukraine and in the direction ... of Kharkiv, Donetsk, " Andriy Parubiy, chairman of Ukraine's national security council, said via a webcast from Kiev.

"Russian troops are not in Crimea only, they are along all Ukrainian borders. They're in the south, they're in the east and in the north," Parubiy said.

After its intervention in the Crimean peninsula, Russia is plotting to foment separatist sentiment elsewhere and Kiev fears a possible incursion in the country's east, he told the Atlantic Council, a Washington think tank.

Parubiy said any day "we might see a huge attack on the territory of continental Ukraine and we are getting ready for it."

Pentagon officials have previously said more than 20,000 Russian troops -- including airborne units and armored vehicles -- have deployed along Ukraine's border, a force big enough to seize control of the eastern region.

"That sounds too high," the official, who spoke on condition of anonymity, told AFP.

Parubiy said the Ukrainian government supported moves by Western countries to impose punitive sanctions on Russia and appealed for a public display of military partnership to send a signal to Moscow over its actions.

"We are calling on our partners to hold a common military exercise" that would "show that the cooperation and partnership is still there," he said through an interpreter.

He urged "visible support, visible presence of our partners" at this moment of crisis.

The Russian troops that have deployed in Crimea were well-trained special forces, he said.

After Russia's takeover of Crimea, Moscow had launched a new strategy aimed at disrupting Ukraine's upcoming presidential elections in May, according to Parubiy.

Kiev authorities had "arrested" separatist leaders in the east and Moscow's attempts to provoke street demonstrations were faltering with fewer people turning out for the protests, he said.

US President Barack Obama and NATO chief Anders Fogh Rasmussen have both denounced Moscow's incursion into Crimea but have called for a diplomatic solution to the crisis.

NATO has bolstered its presence in Eastern Europe since Russia's intervention, deploying radar surveillance aircraft to the area while Washington has sent F-16 fighter jets to Poland.

Obama has ruled out military action in Ukraine, which is not a member of the NATO alliance.