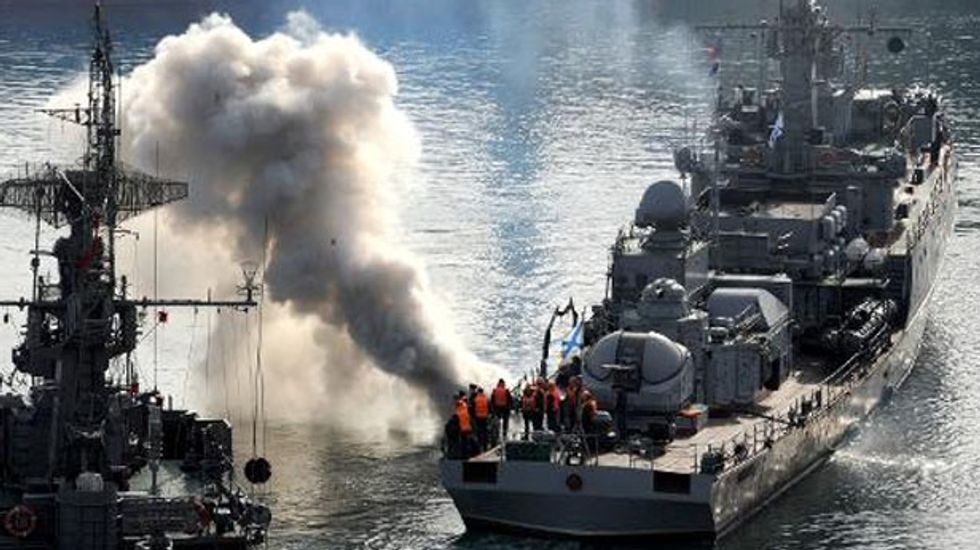 Ukraine's acting president asked parliamentary approval on Wednesday for a set of military exercises with NATO partners that would put US troops in direct proximity with Russia's forces in the annexed Crimea peninsula.

Acting President Oleksandr Turchynov's request came as the chief of Russia's general staff announced in Moscow that his forces were now in full control of all 193 military bases Ukraine had in the Black Sea region prior to its seizure by Kremlin forces at the start of the month.

Turchynov said Ukraine would like to conduct two sets of military exercises with the United Sates this summer -- Rapid Trident and Sea Breeze -- that have prompted disquiet in Russia in previous years.

US President Barack Obama's administration this month proposed a 28-percent spending cut to a Pentagon initiative that supports modernising the armed forces of Ukraine and other ex-Soviet states.

But a Pentagon spokeswoman said that both Rapid Trident and Sea Breeze were still expected to proceed on schedule in the coming months.

The Sea Breeze exercises have especially irritated Moscow because they had on occasion been staged in Crimea -- the base of Russia's Black Sea Fleet.

Those manuevers have in more recent years been moved to the Black Sea port of Odessa where Ukraine also has a naval base.

An explanatory note accompanying Turchynov?s request to parliament said that the naval section of Sea Breeze would this time be conducted over a 25-day span between July and October out of two Odessa ports and "along the waters of the Black Sea".

Russian President Vladimir Putin on March 1 sought and won authority to use force against his neighbour after three months of deadly protests in Kiev brought down a pro-Kremlin regime and replaced it with new leaders seeking closer ties with the West.

The resulting security crisis has set off the worst diplomatic standoff since the Cold War era and prompted the European Union to conduct urgent consultations aimed at weening itself off its dependence on Russian natural gas.

The Kremlin's forces on Tuesday stormed the last Ukrainian ship in Crimea and are now in complete military control of the Belgium-sized cape of two million mostly Russian speakers.

Kiev's Military and Political Studies Centre director Dmytro Tymchuk said on Wednesday that his calculations showed the Russian flag flying over all but 10 of the 61 naval ships Ukraine had until last month.

But only one of Ukraine's remaining vessels -- the Odessa-based frigate Getman Sagaydachniy -- is an actual warship while the rest are mostly cutters and utility craft.

Both the United States and NATO have expressed grave concern about Russia's recent military buildup along Ukraine's eastern border and have warned Putin repeatedly not to push his troops beyond the annexed peninsula.

But Westerns powers have thus far also flatly refused to get militarily involved in the conflict and analysts doubt that Putin will feel particularly concerned by the planned war games.

"Putin is now certain that none of the NATO members intend to fight for Crimea," said Oleksiy Melnyk of Kiev's Razumkov political research centre.