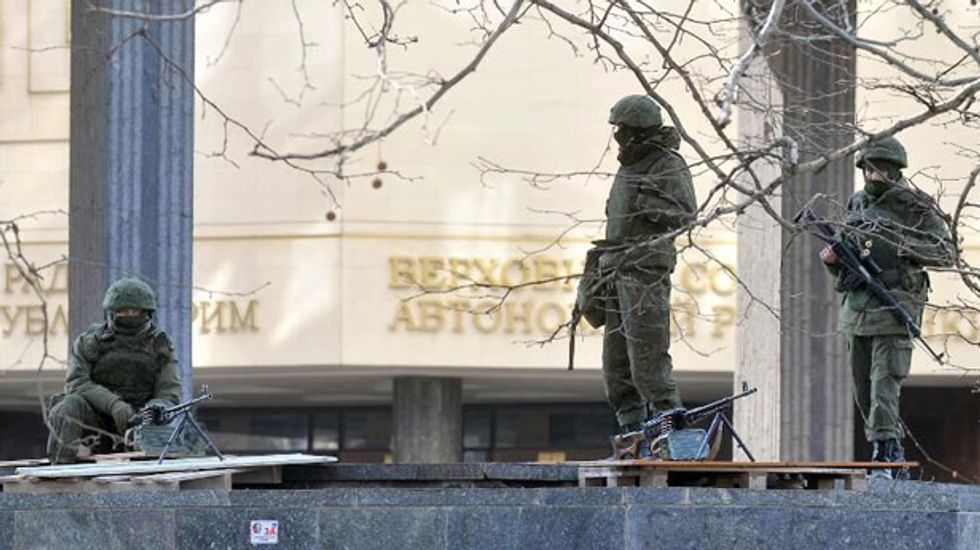 The UN chief called for immediate calm in Ukraine as the Security Council convened an emergency session Saturday after Russian lawmakers approved the deployment of troops to the region.

"He calls for an immediate restoration of calm and direct dialogue between all concerned to solve the current crisis," UN spokesman Martin Nesirky told reporters in New York.

Britain called the emergency talks at the UN Security Council, meeting Saturday for the second time in 24 hours to discuss the unfolding crisis.

"We are deeply concerned about the situation, especially the developments over the last 24 hours," British Ambassador Mark Lyall Grant told reporters on his way into the session.

"That is why we have called this emergency session to find out what justification Russia claims to have for the actions they are taking at the moment," he added.

The UN secretary-general reiterated his call "for the full respect for, and preservation of, the independence, sovereignty and territorial integrity of Ukraine."

Poised to fly to Europe, Ban has ordered the deputy secretary-general to brief the emergency Security Council talks.

"The most important thing is to raise concerns about what is happening on the ground," said Raimonda Murmokaite, ambassador of Lithuania, the outgoing president of the Council.

The UN envoy to Ukraine, Robert Serry, said he was leaving the country and ruled out a visit to the Crimea region as requested by Ban following emergency talks Friday.

"I have since been in touch with the authorities of the autonomous republic of Crimea and have come to the conclusion that a visit to Crimea today is not possible," Serry said.

He planned to brief Ban in Geneva and "consult with him on next steps."

Dozens of pro-Russian armed men in full combat gear patrolled outside the seat of power in Crimea's capital Simferopol.

Similar gunmen seized the city's parliament and government buildings Thursday and took control of its airport and a nearby military base on Friday.