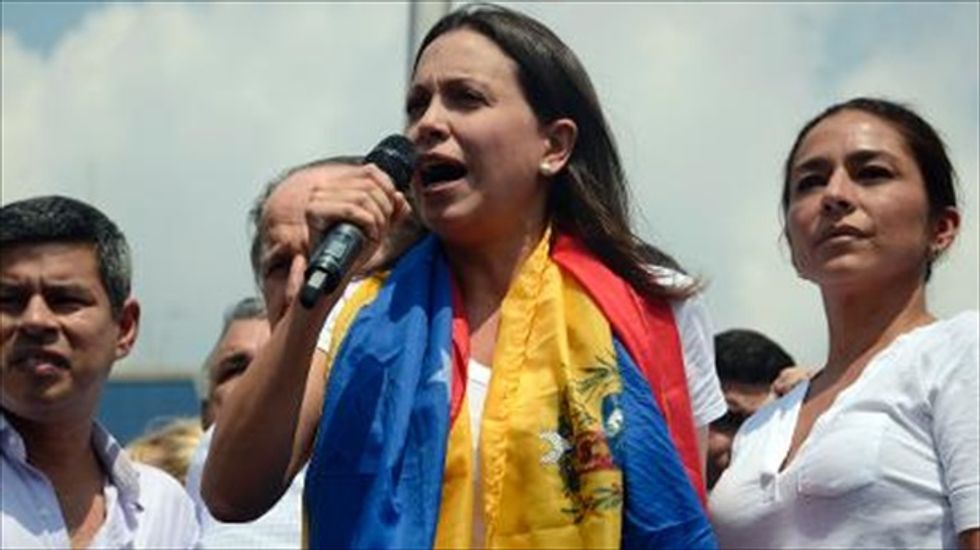 Machado was a lawmaker until Monday, when National Assembly head Diosdado Cabello kicked her out, stripped her of parliamentary immunity, and threatened to arrest her for going before the Organization of American States as a guest of Panama to try to talk about her country's crisis.

Fiery with defiance, Machado -- who flew in from Peru Wednesday -- said that she was still a legislator "because that's what the Venezuelan people want, and I will continue doing it as long as Venezuela wants it."

"If the price that I have to pay so that our voice is heard around the world is this persecution and these threats ... I'll pay it once and a thousand times," Machado said at a Caracas rally.

The government is cracking down on opponents after more than six weeks of street protests that have resulted in at least 34 dead and some 500 wounded.

Maduro and his government have been the target of protests fueled by public anger over soaring crime, hyperinflation and shortages of basic household goods.

Machado, a 46-year-old engineer first elected in 2010, advocates an opposition strategy that seeks to generate pressure with street protests to force Maduro from power.

Former opposition mayor Leopoldo Lopez -- in a military jail for more than a month accused of instigating anti-government violence -- also supports the strategy, nicknamed "the way out."

Maduro says the protests are part of a coup plot led by the opposition in alliance with Washington and conservative Colombians.

The protests however have been losing steam in the last weeks.

Machado said that she plans to ignore Cabello's order and go to the next National Assembly meeting.

It is unclear however if the government will arrest Machado.

- Mystery of the generals -

Machado returned from her Peru trip a day after Maduro announced the arrest of three air force generals accused of plotting a coup.

While the government has given no details on the arrests, a government source told AFP that the three are brigadier generals, and one is a former commander of the La Carlota Air Base in Caracas.

Retired general Raul Salazar, a former defense minister under Maduro's predecessor, the late Hugo Chavez, was mystified by the arrests.

None of the generals commanded any troops, Salazar said. "How could they pull off a coup if they had no troops?" he asked.

"Now, if they are part of something broader, that's something else," he told AFP.

In Washington, a gathering of rights groups lamented the "timid" response by the OAS and Venezuela's neighbors to the country's political chaos.

The OAS "has abstained from any real leadership on the current crisis of human rights and the looming specter of a failed state, even though it was formed precisely to address issues like these," the jailed Lopez wrote in an opinion piece published in The New York Times.

"To be silent is to be complicit in the downward spiral of Venezuela’s political system, economy and society," he wrote.