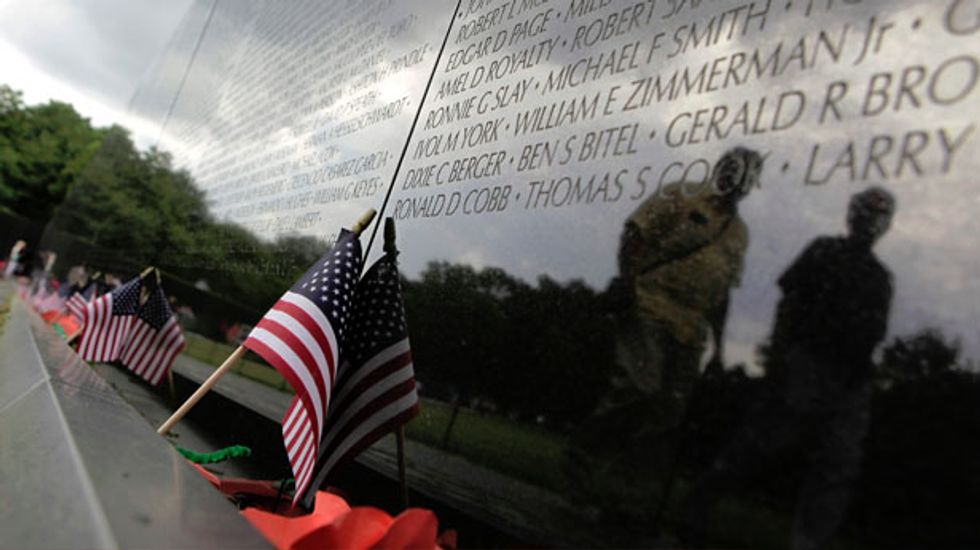 The men, including one who was the victim of a poison gas attack on his first day in Vietnam and another whose duties included sorting through body parts of soldiers killed in combat, called on the military to upgrade the discharges of veterans of the conflict who suffer from PTSD.

The lawsuit, filed in U.S. District Court in Connecticut, seeks class action status for what it estimates are tens of thousands of veterans who can now be shown to suffer from PTSD, a condition not recognized by the military in the 1960s and early 1970s at the time of the U.S. war in Southeast Asia.

"The military gave these service members other than honorable discharges based on poor conduct such as unauthorized absence without leave, shirking, using drugs, or lashing out at comrades or superior officers," the lawsuit said. "These behaviors, however, are typical of those who have recently experienced trauma and were symptoms of the veterans' underlying, undiagnosed PTSD."

A Pentagon spokeswoman declined to comment on the lawsuit, which names the secretaries of the U.S. Army, Navy and Air Force as defendants.

PTSD has received wider attention in the United States in recent years following wars in Iraq and Afghanistan. The lawsuit notes that the U.S. armed forces now have procedures in place to diagnose PTSD and will offer honorable discharges to soldiers, sailors and airmen who suffer from the condition, but have not retroactively applied those benefits to Vietnam veterans.

"Isolated and impoverished, they have struggled to cope not only with their war wounds, but also with the shame of other than honorable discharges," the lawsuit said.

The five named plaintiffs are Conley Monk of Connecticut, George Siders of Georgia and Kevin Marret of Indiana, all former Marines, and James Cottam of California and James Davis of New York, both U.S. Army veterans.

The lawsuit grew out of Yale Law School's Veterans Legal Services Clinic, a program started in 2010 in which law students helped veterans navigate the bureaucracy of the Veterans Administration. Law students prepared the lawsuit on behalf of the five veterans.

After repeatedly running into cases of veterans with PTSD who were effectively being denied benefits because of their condition, the students realized they were facing a bigger problem, said one of the interns, who goes by the name V Prentice.

"We realized the (Defense Department) discharge upgrade boards wasn't the place to find justice because there were not consistent and medically appropriate standards being applied there," Prentice said.

(This version of the story was corrected to show appeals to Defense Department discharge upgrade boards, not Veterans Administration)