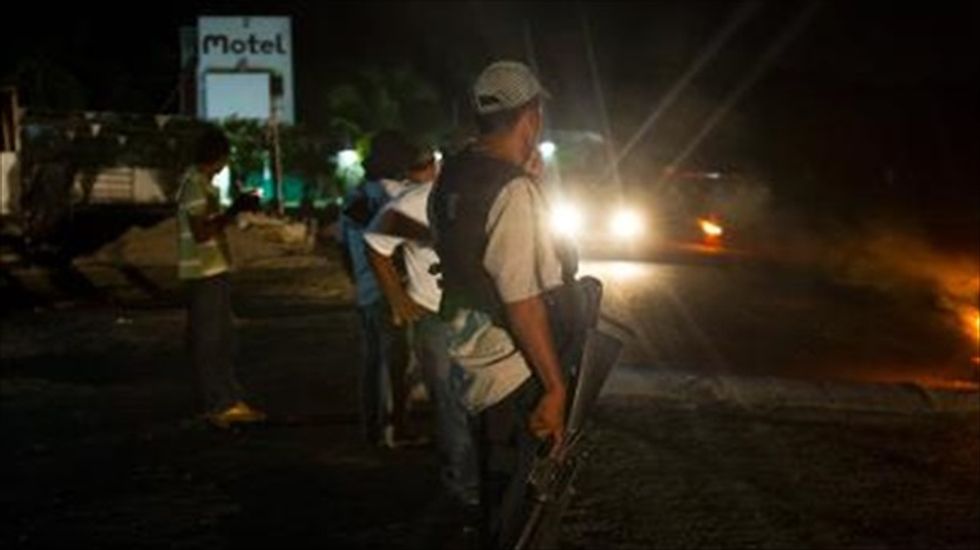 Armed members of the citizens' self-protection police stand guard at night in Apatzingan in Michoacan state, Mexico, on Feb. 24, 2014 [AFP]

Mexican authorities accused Monday the leader of a vigilante group founded to combat a drug cartel of ordering the murder of a mayor who opposed such "self-defense" forces.

It was the second arrest of a vigilante leader in March in Michoacan, an agricultural state that was so beset by violence that civilians decided to take up arms a year ago.

After initially warning against the movement's expansion, the government of President Enrique Peña Nieto allied itself with the vigilantes earlier this year, a move that analysts warned could risk creating a violent paramilitary-like or criminal force.

Authorities said vigilante leader Enrique Hernandez Salcedo was among 19 people detained in connection with the murder of Gustavo Garibay Garcia, mayor of Tanhuato, a town of 15,000 people.

Alfredo Castillo, the federal security commissioner for Michoacan, said authorities believe Garibay was gunned down on March 22 due to his opposition to the presence of vigilantes.

Three of the gunmen told investigators that they committed the crime under "the instructions of their leader Enrique Hernandez Salcedo," Castillo told a news conference.

Castillo said Hernandez, whose group is based in the town of Yurecuaro, reserved his right to make a statement but that there is enough evidence to prove his participation in the murder.

Authorities have now arrested more than 50 vigilantes, including two leaders, for various crimes, he said.

"This is a direct consequence of the government's policies. It's not a minor issue," Alejandro Hope, a former intelligence official and security expert at the Mexican Institute for Competitiveness, told AFP.

Earlier in March, authorities arrested one of the most high-profile self-defense leaders, Hipolito Mora, on charges of being behind the March 8 double murder of two fellow vigilantes.

Mora, a lime grower from the town of La Ruana, has declared his innocence.

With local police failing to curb the Knights Templar, civilians took up arms in February 2013 to repel the cult-like cartel, which had been terrorizing communities through murder, kidnappings and extortion of their businesses.

The self-defense militias eventually took control of security in some 20 towns and began to work hand-in-hand with federal authorities earlier this year.

The vigilantes estimate that they have 20,000 people in their ranks.

Peña Nieto has deployed nearly 10,000 troops and federal police to take control of security in the state, known as a major exporter of lime and avocados.

Last year, officials voiced fears that the vigilantes may have been infiltrated by a rival cartel known as Jalisco New Generation.

But Peña Nieto's administration joined forces with the vigilantes in January, announcing it would legalize them by offering to fold them into a "rural defense corps" under the army.

Javier Oliva, a security expert at Mexico's National Autonomous University, said the government decided to work with the vigilantes because "it was the least bad option at the time."

The latest arrest, he said, also aims to "give a boost to the rule of law to show that nobody can be exempt from justice."