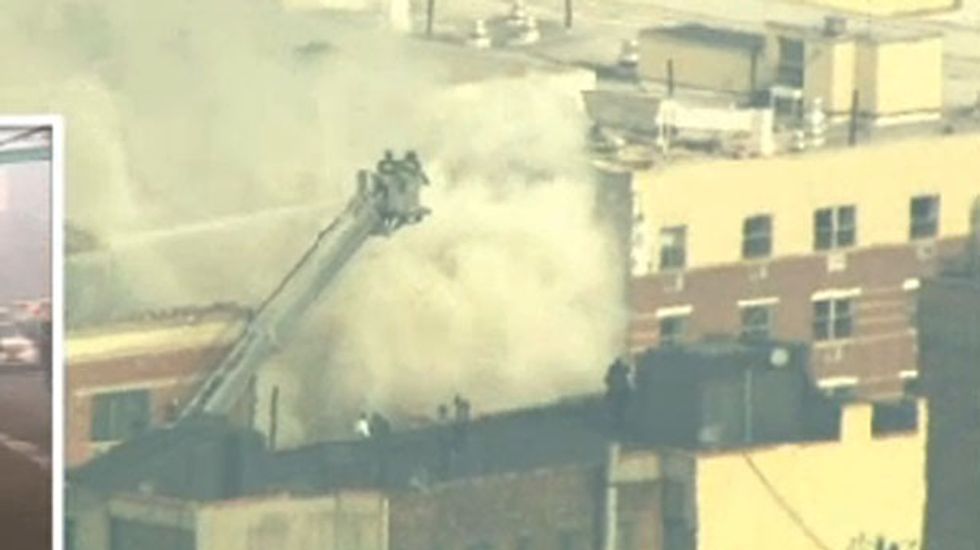 By Chris Francescani and Edith Honan

NEW YORK (Reuters) - Two New York buildings collapsed on Wednesday in an explosion believed to be caused by a gas leak, killing at least two people, injuring at least 18, and setting off a search for anyone trapped in the debris, officials said.

A blast that scattered debris onto nearby rooftops brought down adjacent five-story structures shortly after 9 a.m. on the largely residential block at East 116th Street and Park Avenue in Upper Manhattan.

Clouds of thick smoke billowed from the rubble of the apartment buildings that sat above a ground-level church and a piano store. Officials declined to give a number of people still missing in the rubble.

Mayor Bill de Blasio, who rushed to the scene in East Harlem, where a cascade of twisted and burnt metal blocked the sidewalk and covered parked cars, said preliminary information showed the explosion was caused by a gas leak.

Just before the explosion a resident in a neighboring building complained of a gas odor to Con Edison, officials said.

"We dispatched a crew two minutes later and the crews arrived just as the explosion occurred," said Alfonso Quiroz, a spokesman for Con Edison. "We are looking at any connection."

Neighbors said they thought an earthquake was shaking them from their beds and breakfast tables. The explosion, which could be heard from blocks away, shattered windows around the neighborhood.

"All of the sudden the whole building shook. We had no idea what was going on," said Robert Pauline, 56, a Columbia University data processor whose apartment six blocks away was rocked by the explosion.

Police spokesman Martin Speechley said the cause of the explosion was under investigation.

President Barack Obama was briefed on the collapse and sent his condolences to the victim families and his support to first responders at the scene.

"Our thoughts and prayers go out to everyone impacted by this incident," the White House said in a statement.

Crowds of residents, their faces covered with protective scarves and masks, filled the sidewalks of surrounding streets, which were blocked off with yellow police tape.

Fire trucks used high cranes to spray blasts of water into the rubble, as dozens of ambulances and police cruisers with flashing lights swarmed the scene.

Commuter trains were stopped on nearby tracks because of the debris on the rails and passengers were ordered off the Metro-North Railroad cars at the Fordham stop in the Bronx, passengers said.