'We are watching you,' protesters warn Ukraine's new leaders 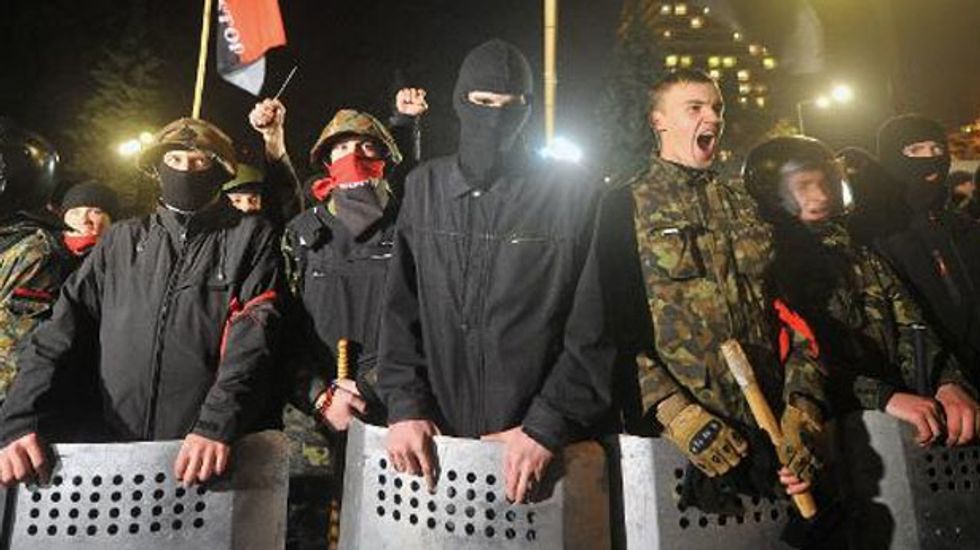 Time appears to have stood still in the weeks since anti-government protests turned Kiev's Independence Square into a battleground, the site almost perfectly preserved as a warning to Ukraine's new leaders that those who swept them to power are keeping close watch.

An angry tangle of metal, barbed wire, sandbags and tyres still block the entrances to the square where they were erected as a barricade against riot police in the final bloody weeks of three months of protests which left over 100 people dead.

Passers-by linger in front of makeshift shrines, surrounded by masses of wilted flowers and mementos honouring the dead, while others pose for a photo in front of the untouched theatre of Ukraine's revolution.

To one side a wooden chapel has sprung up in a matter of days.

"We will stay here until the authority becomes normal and not corrupt, until everything becomes okay," insists Roman, 23, who is among the die-hard protesters still living in the tents covering the Maidan square and an adjoining boulevard.

"Maidan will only win when we see significant changes".

He and other youths in varying states of military dress mill about smoking between the tents, where the acrid smell of fires permeates the air, while some ladle out soup for the needy: the weary routine of a not-yet finished revolution.

The tinderbox atmosphere that took hold here when protests first began in November over ousted president Viktor Yanukovych's decision to reject closer ties with the EU in favour of old master Russia, has given way to one of an extended camping trip.

But as Ukraine gears up for snap polls on May 25, the protesters are staying put until they see the changes they fought for.

"I am going to be here until the end, until the presidential election on May 25. We don't trust anyone... we are just watching them," Sergiy, a 31-year-old actor from Odessa told AFP.

"It is necessary to show the new authority that we are here, and we control them. We want them to remember that they were elected by Maidan, it is their responsibility."

It has been a gruelling introduction to power for the protest leaders who took office after their uprising ousted Yanukovych five weeks ago.

They stood by slack-jawed along with the international community as Russia seized control of the Black Sea peninsula of Crimea and have scrambled to shore up an economy in freefall.

As Kiev fearfully eyes what one defence official estimated were as many as 100,000 Russian troops massed on its borders, concerned Moscow is plotting further incursions into its territory, dissent is rumbling over the performance of interim Prime Minister Arseniy Yatsenyuk's government.

Former world heavyweight boxing champion Vitali Klitschko, a key protest figure and one of the frontrunners in the upcoming election, this week told parliament the actions of some officials had been "ineffective".

"If things continue as they are now, we may propose selecting a new head of the Verkhovna Rada (parliament)," he said, referring to interim president Oleksandr Turchynov.

Professor of political science at New Jersey's Rutgers University Oleksandr Motyl said it was clear that Ukrainians were disappointed.

People are saying: "Russia has invaded and they wonder why the Ukrainian response was so weak. Where is the economic reform? Why are the new leaders either from the old guard or untested and inexperienced?" he told AFP via email.

"Personally I find that the government has done about as well as one could expect under conditions of war," he said, pointing to Kiev's ability on Thursday to secure a pledge of $27 billion in international aid, and major shuffles in many ministries and at the governor level.

"But Ukrainians, especially after the exalted expectations of the Euro Revolution, understandably want more ... My guess is that these criticisms will remain within certain bounds as long as a palpable Russian threat is felt," Motyl said.

Away from the now-iconic square, in a steep, cobbled street, ordinary Ukrainians held no illusions about their new leaders, but tended towards optimism over the change sweeping their country.

Many agreed that whatever had happened, including the loss of Crimea, the new government was an improvement on the last.

"I see positive changes, new achievements and I realise that it is impossible to do more in one month," said Kateryna, a 56-year-old civil servant.

"It is also impossible to overcome the effects of the previous government. Of course there are no illusions, there are a lot of mistakes. We need... a stronger anti-corruption policy and so on. But I think this is a right way."

Mykola, a 61-year-old engineer said: "They inherited a terrible legacy -- no money, no economy, a weak army and police. The new government should change this, but of course not in one month."