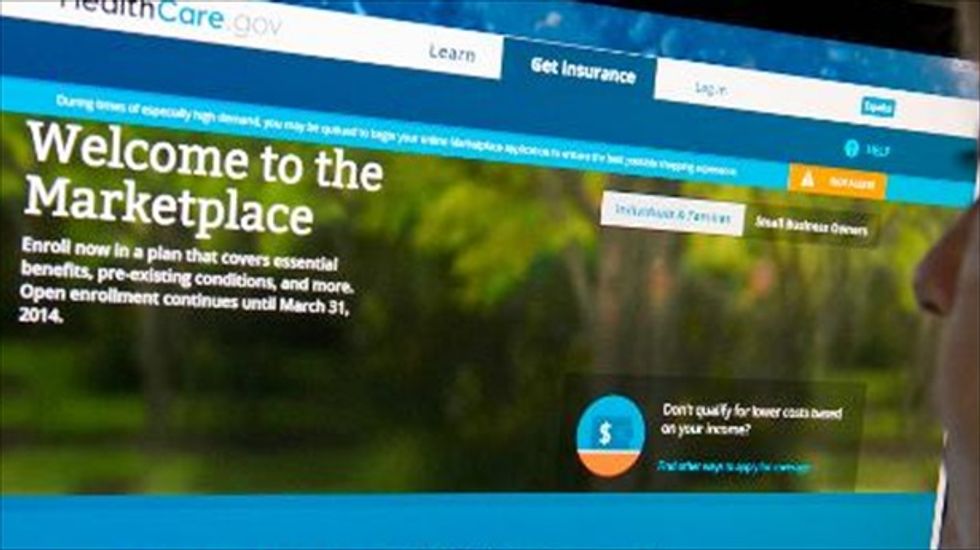 A further 940,000 Americans registered for President Barack Obama's health care plans in February, bringing to 4.2 million the number of people who have signed up so far, officials said Tuesday.

The White House also geared up for what it said would be "surge of enrollment" for the system, now that a malfunctioning website that hampered the key law's roll out has been fixed, before a March 31 deadline.

"As more Americans are learning just how affordable market place plans can be, more are signing up to get coverage," said Health and Human Services (HHS) Secretary Kathleen Sebelius.

The new figures were unveiled on a day that comedy website "Laugh or Die" unveiled a new online video of the president braving the satirical jabs of comedian Zach Galifianakis, to market the plan to the site's young fans.

For the system to work, Obamacare must attract young, healthy registrants who do not claim for big budget care to subsidise older, sicker patients who have also signed up.

The administration said 25 percent of those who signed up in February were aged between 18 and 34.

Officials believe that many more younger patients will be spurred to sign up before the deadline.

Americans who do not have health insurance by the end of the month are liable for fines under the new law, which is the centerpiece of Obama's domestic legacy and gets the United States closer to universal health care coverage than ever before.

The non-partisan Congressional Budget office last month revised down its projected enrollment figures at the end of the six-month sign up period to six million from seven million.

Officials however declined to say whether the new law would reach that mark.

They also were unable to provide figures for the number of Americans who have paid for plans once they have been enrolled and also could not provide a figure for the number of people who have signed up for coverage who previously had health care.

The latter figure will be crucial in establishing whether Obamacare, which inflicted a heavy political price on the administration, has actually achieved its goal of offering affordable healthcare to all Americans.

Republicans, who have campaigned for years to repeal the law, charge that it is a failure, and point out that the president has delayed several key aspects of it and charge that the modifications were done to protect Democrats from damage in mid-term elections in November.

A man was accidentally killed by his own dog during a hunting trip in Turkey, the New York Post reports.

Ozgur Gevrekoglu, 32, was wrapping up a hunting session with his friends in Samsun Province last weekend when his dog allegedly touched the trigger of a loaded shotgun gun with its paw, causing it to discharge, killing Gevrekoglu. He was pronounced dead on arrival after being rushed to the hospital.

Police have smashed a huge drugs "super-cartel" that controlled around a third of Europe's cocaine trade, arresting 49 people in various countries, including six chief suspects in Dubai, Europol said on Monday.

The international operation codenamed "Desert Light" seized 30 tonnes of the drug and led to arrests in Belgium, France, the Netherlands and Spain, the European Union's police agency said in a statement.

The rollout of the special counsel to investigate Donald Trump revealed a subtle shift in attorney general Merrick Garland's approach to the criminal inquiries into the former president.

Garland had hoped to avoid taking that step but found it was necessary after Trump announced his entry into the 2024 presidential race and Republicans increasingly coming to his defense by accusing the attorney general of weaponizing the Justice Department against them, reported the New York Times.