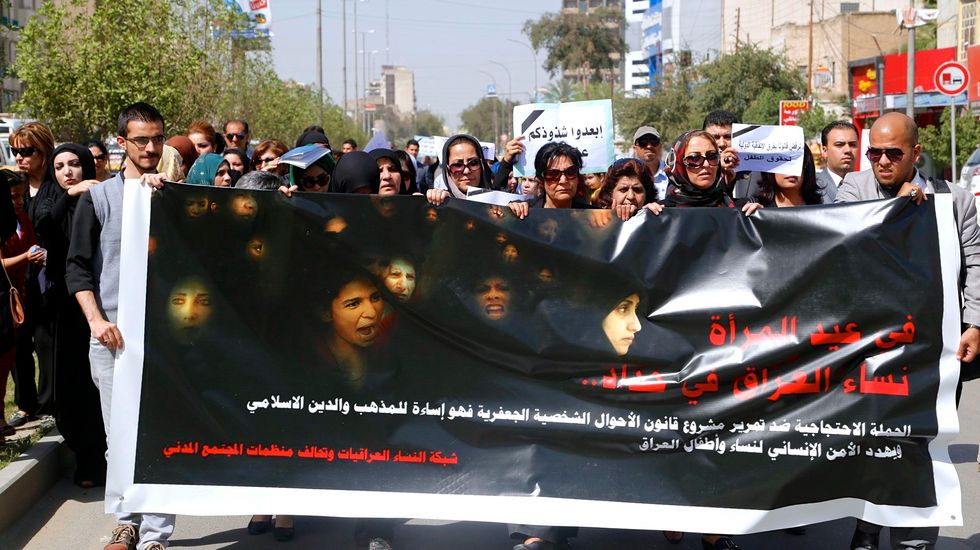 About two dozen Iraqi women demonstrated on Saturday in Baghdad against a draft law approved by the Iraqi cabinet that would permit the marriage of nine-year-old girls and automatically give child custody to fathers.

The group's protest was on International Women's Day and a week after the cabinet voted for the legislation, based on Shi'ite Islamic jurisprudence, allowing clergy to preside over marriages, divorces and inheritances. The draft now goes to parliament.

"On this day of women, women of Iraq are in mourning," the protesters shouted.

"We believe that this is a crime against humanity," said Hanaa Eduar, a prominent Iraqi human rights activist. "It would deprive a girl of her right to live a normal childhood."

The legislation goes to the heart of the divisions in Iraq since the overthrow of Saddam Hussein in 2003, as Shi'ite Islamists have come to lead the government and look to impose their religious values on society at large.

It describes girls as reaching puberty at nine, making them fit for marriage, makes the father sole guardian of his children at two and condones a husband's right to insist on sexual intercourse with his wife whenever he wishes.

The legislation is referred to as the Ja'afari Law, named after the sixth Shi'ite imam Ja'afar al-Sadiq, who founded his own school of jurisprudence.

The draft was put forward by Justice Minister Hassan al-Shimari, a member of the Shi'ite Islamist Fadila party, and approved by the cabinet on February 25.

It must now be reviewed by parliament, but the draft could very well languish, with national elections scheduled for April 30, and vocal opposition among secularists.

Shi'ite religious parties first attempted to pass a version of the law in 2003 under U.S. occupation, angering secular Iraqis and prompting protests. Since then, amid Iraq's turmoil, the tug-of-war has continued between Iraq's secularists and Islamists.

Iraq's current personal status law enshrines women's rights regarding marriage, inheritance, and child custody, and has often been held up as the most progressive in the Middle East.

"This is the core of the freedom. Based on the Iraqi constitution, each component of the Iraqi people has the right to regulate its personal status in line with the instructions of its religion and doctrine," said Hussein al-Mura'abi, a Shi'ite lawmaker and Fadila party leader.