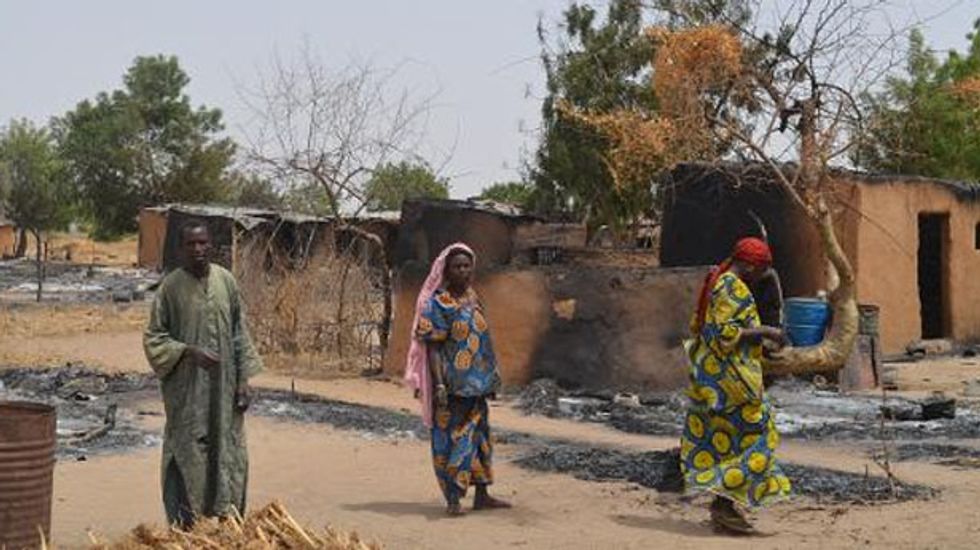 A Nigerian school principal on Thursday denied military reports that most of the girls kidnapped from her school by Islamist gunmen were now safe, as the parents of those taken voiced anger over the conflicting claims.

The defence ministry and the government in Borno state, where the attack took place, have said that 129 girls were abducted by Boko Haram militants from a secondary school in the Chibok area late Monday.

Defence spokesman Chris Olukolade said on Wednesday that all but eight of the girls were safe, citing the principal of the Government Girls Secondary School in Chibok.

"The report from the military is not true," principal Asabe Kwambura told AFP in Lagos.

She said the information provided by Borno's governor Kashim Shettima on Wednesday that only 14 girls had escaped their captors was "correct".

The mass kidnap -- which has sparked global outrage -- came just hours after the deadliest attack ever in the capital Abuja, where a bomb blast also blamed on Boko Haram killed at least 75 people.

"For the military (which) is supposed to find and rescue our children to be spreading such lies shows that they have no intention of rescuing our girls," said Lawan Zanna, a Chibok resident whose daughter was among those taken.

"It is the highest form of insult," he added. "They said our girls have been freed... Bring them to us because they are yet to be reunited with us."

Boko Haram has repeatedly attacked schools and universities during an extremist uprising that has killed thousands of people since 2009.

The group's name loosely translates as "Western education is forbidden".

Students have been massacred in their dormitories and bombs set off at university campuses, but the mass abduction specifically targeting girls is unprecedented.

Borno's governor has offered a 50 million naira ($300,000, 216,000 euro) reward to anyone with information leading to the return of the schoolgirls.

Parents in Chibok swarmed the home of the area's tribal chief on Thursday, demanding clarification after the military claim, residents said.

"The feeling that the military was in pursuit of the kidnappers kept hope alive among parents," said one resident, speaking on condition of anonymity.

The dubious report that most of the children were now safe "has shattered that hope", he said.

They killed two guards, then forced their way inside, herding the girls on to trucks before driving away.

Three of the girls who escaped said they were taken to the Sambisa Forest part of Borno, an area where Boko Haram is known to have well-fortified camps.

The school attack and Monday's bombing at a packed bus station on the outskirts of Abuja have underscored the serious threat the Islamists pose to Africa's most populous country and top economy.

President Goodluck Jonathan has summoned his security chiefs for a meeting on Thursday to review the unrest.

In a rare move, he also invited all of Nigeria's 36 state governments to join a second security meeting later in the day.

Jonathan, who is grappling with an unprecedented crisis in his own party, has faced mounting criticism over his failure to contain the Boko Haram threat.

The insurgency has cost more than 1,500 lives already this year, the deadliest stretch in Boko Haram's five-year uprising, which the group says is aimed at creating a strict Islamic state in Nigeria's mainly Muslim north.

"In Islam, women and children are spared during war," said a visibly shaken Shettima.