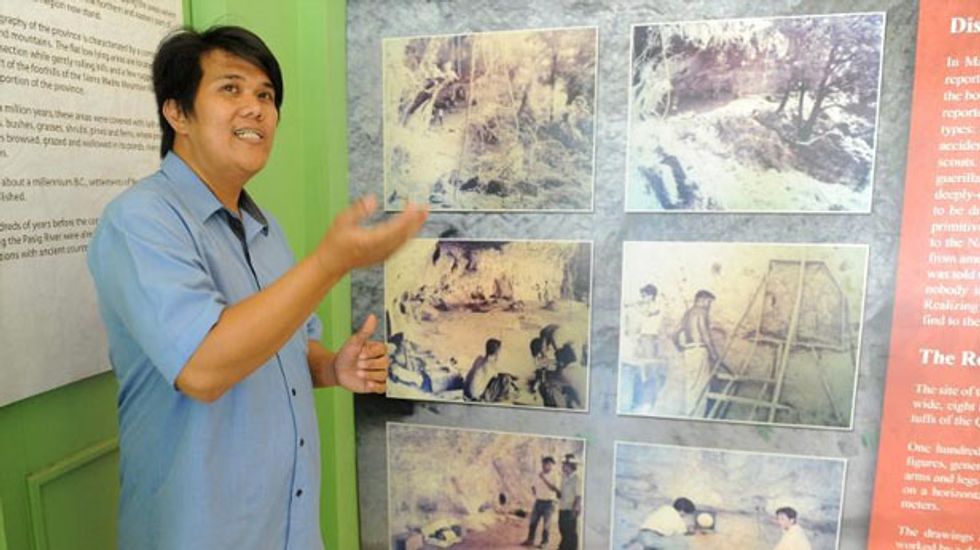 On a small rock wall a short drive from the Philippine capital, enigmatic carvings that are believed to date back 5,000 years are in danger of disappearing before their mysteries can be solved.

The 127 engravings of people, animals and geometric shapes are the Southeast Asian nation's oldest known artworks, but encroaching urbanisation, vandals and the ravages of nature are growing threats.

"Eventually they will disappear... preservation is out of the question," veteran anthropologist Jesus Peralta, who did an extensive and widely respected study of the carvings in the 1970s, told AFP.

The artworks have been declared a national treasure, regarded as the best proof that relatively sophisticated societies existed in the Philippines in the Stone Age.

"They show that in ancient times, the Philippines did have a complex culture. It's a recording of our ancestors," said Leo Batoon, a senior researcher of the National Museum.

Museum scientists believe the carvings date back to 3000 BC, based on carving tools and pottery shards discovered at the site, indicating they originated before the use of metal tools.

This makes them far older than the country's second oldest known artworks, a series of geometric shapes in the mountainous northern Philippines that are believed to date to 1500 BC, according to Batoon.

But museum workers say it is difficult to conclusively determine the age of the carvings -- scientifically referred to as 'petroglyphs' -- due to technical and financial constraints.

"Most of our artifacts in the museum are sent abroad and only if we have partners and proponents to spend for such dating," said Batoon.

Little else is known about the figures, or the people who etched them.

One clue is that many of the human carvings appear to be in a squatting position, which has led scientists to theorise that the area was a place of worship.

The carvings were first documented by acclaimed Philippine artist Carlos Francisco in 1965 while he was leading a Boy Scout troop on a hike.

Since then, they have been known as "the Angono Petroglyphs," after Francisco's hometown nearby.

The World Monuments Fund, a New York-based private group that works to protect historical sites, placed the Angono Petroglyphs on its list of endangered monuments in 1996 and has provided help in their preservation.

The UN Educational, Scientific and Cultural Organization (UNESCO) has also placed the petroglyphs on its "tentative list" of world heritage sites.

But that has done little to stem the powerful tide of neglect.

The carvings are in mountains about 90 minutes' drive from Manila that only a few decades ago were entirely forested.

But most of the trees have since been chopped down to make way for the country's fast-growing population, with a holiday resort, a golf course and upper-class housing now surrounding the rock wall.

A real estate developer owns the land on which the petroglyphs sit.

He donated the hillside on which the carvings are located back to the national museum but allowed only a small buffer zone, and a road runs just 10 metres (33 feet) from the carvings.

Wind and rain, as well as plant roots creeping through the stone, have also damaged the soft rock where the carvings are etched.

The poorly funded national museum cannot afford to pay for adequate security so vandalism is also a constant worry.

People have scrawled their names on the rock and there are slash marks on some carvings that archaeologists have determined were only made recently.

Mining at a nearby gravel pit a few years ago also shook the ancient site, Roden Santiago, a national museum guide, told AFP.

Fortunately, after the museum made a request, the pit owners found a less threatening way to extract their minerals, according to Santiago, but he fears the foundations of the rock wall face more threats.

He said planned new housing developments nearby would mean more underground pipes, which could weaken the hillside.

And despite their rich importance to the nation's history, the carvings are not a major tourist attraction.

The national museum has constructed a small wooden viewing deck so visitors can get a good look at the petroglyphs without getting close enough to deface them, but there is little else to attract.

Tattoo artist Myke Sambajon did make the trip from Manila recently with his friends to see the carvings and said it was worth the long motorcycle ride despite being initially disheartened by rudimentary nature of the tourist site.

"I felt pride because I never knew our people had anything this old," Sambajon told AFP. "I thought only other people had these things. We realised we also have an ancient history."