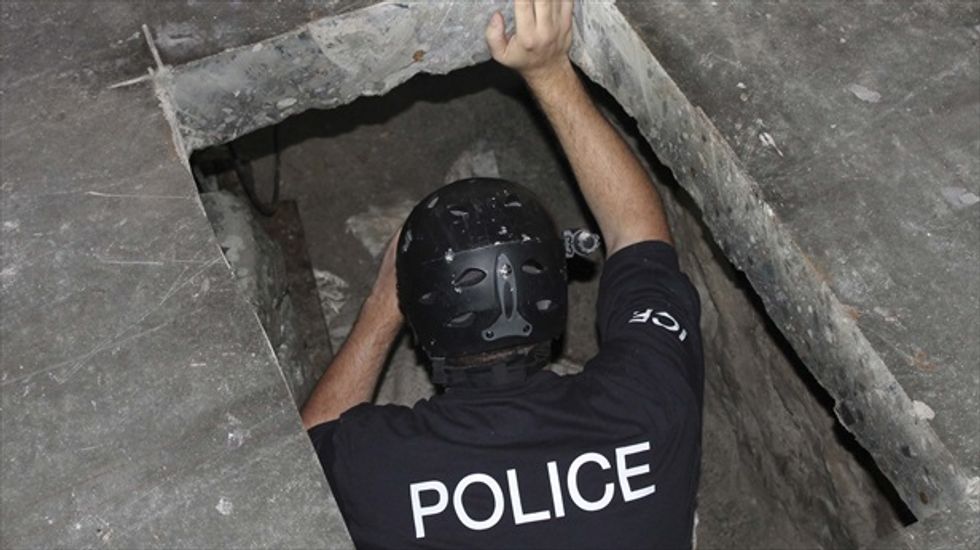 The discovery led to the arrest of a 73-year-old woman accused of running one of the warehouses connected to a drug smuggling operation, according to a joint news release by four federal agencies.

The tunnels were discovered as part of a five-month investigation by the so-called San Diego Tunnel Task Force.

Federal law enforcement officials said the first tunnel, which connects a warehouse in Tijuana, Mexico, with one in an industrial park in the border community of Otay Mesa, is about 600 yards long and is furnished with lighting, a crude rail system and wooden trusses.

The passageway is accessed via a 70-foot shaft secured by a cement cover and includes a pulley system on the U.S. side apparently intended to hoist contraband up into the warehouse.

The second tunnel was even more sophisticated, built with a multi-tiered electric rail system and an array of ventilation equipment.

"Going underground is not a good business plan. We have promised to locate these super tunnels and keep powerful drug cartels from taking their business underground and out of sight, and once again, we have delivered on that promise," Duffy said.

The two tunnels are the sixth and seventh cross-border passageways discovered in the San Diego area in less than four years, according to the task force.

Since 2006, federal authorities have detected at least 80 cross-border smuggling tunnels, most of them in California and Arizona, and seized some 100 tons of narcotics associated with them.

[Image: A law enforcement officer enters a drug tunnel found in a warehouse in Otay Mesa, California April 3, 2014, in this handout photo released to Reuters April 4, 2014. Handout from Immigration and Customs Enforcement to Reuters.]