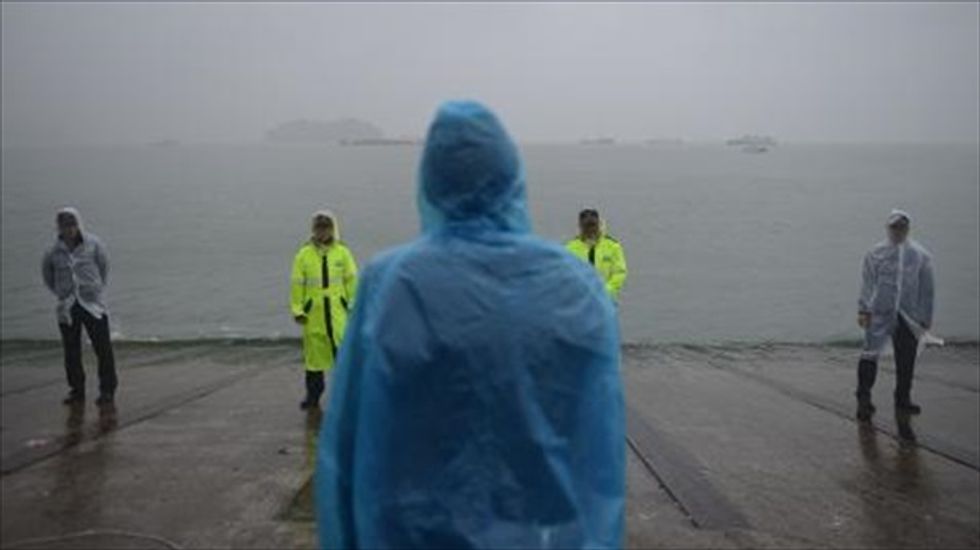 A man stands before policemen at Jindo harbour on April 17, 2014, as distraught relatives of the missing ferry passengers maintain an agonising vigil on shore [AFP]

South Korean divers renewed efforts Friday to access a capsized ferry in which hundreds of schoolchildren are feared trapped, as the grief and frustration of anguished parents gave way to anger and recrimination.

The confirmed death toll rose overnight to 25, but the focus of concern remained the 271 people still unaccounted for 48 hours after the ferry capsized and sank Wednesday morning.

The coastguard says more than 500 divers have been deployed to the accident site, but powerful currents and poor visibility have frustrated attempts to access the submerged vessel in the increasingly slim hope of finding survivors trapped in air pockets.

The Sewol had 475 people on board when it ran into trouble, among them 352 children on a high school outing to Jeju island, a popular holiday destination.

Among the relatives of the missing, especially the parents of the students, there was growing resentment over what they see as the inadequacy of the rescue response.

In an appeal broadcast live on television Friday morning, a self-appointed spokesman for the relatives accused the authorities of indifference and deception.

"The government lied yesterday," he said, speaking at a podium in a gymnasium in Jindo island where hundreds of relatives have been sleeping on the floor since the tragedy unfolded.

Disputing the official figures of hundreds of divers, vessels and aircraft being deployed, he said he and other relatives had visited the rescue site and seen only a dozen ships and helicopters.

"Everyone, is this the reality of South Korea? We plead once more, please save our children," he said.

A large monitor offering a live feed from four cameras at the rescue site was brought into the gymnasium overnight, but initial interest in the fog-disrupted images soon faded.

The initial public backlash has centred on the captain, Lee Joon-Seok, and his 28 crew, most of whom survived the disaster.

Lee apologised Thursday to the victims and their relatives, but offered no clear explanation for what caused the Sewol to capsize.

"I feel really sorry for the passengers, victims and families," he said. "I feel ashamed."

Regional coastguard commander Kim Soo-Hyun said investigations were under way into reports that the captain and crew were among the first to leave the stricken vessel.

As well the cause of the disaster, investigators will be looking at why passengers were ordered to stay in their cabins and seats for up to 40 minutes after the ferry ran into trouble.

Furious relatives believe many more people would have escaped if they had reached evacuation points before the ship listed sharply and water started flooding in.

Most experts believe the ship either hit a rock or made a sharp turn that shifted its heavy cargo consignment -- including more than 150 vehicles -- and caused it to list and capsize,

The Chonghaejin Marine Co. which operates the Sewol said Lee, 69, was an experienced captain who had been working the Incheon-Jeju route for the past eight years.

Foggy conditions and a steady drizzle on Friday did nothing to lift the spirits of rescue teams who had to repeatedly suspend dive operations the day before because of the dangerous conditions.

Three giant floating cranes were still making their way to the site, where they will be used to try to raise the vessel, which is completely submerged apart from a small section of the keel.

President Park Geun-Hye, who visited Jindo on Thursday, urged the rescuers not to lose heart and promised relatives that the authorities were still working on the assumption that they would find people alive.

In a tense meeting with parents in the gymnasium on Thursday, Park was repeatedly interrupted by angry shouts from the crowd.

"What are you doing when people are dying? Time is running out!" one woman screamed at Park.

U.S. President Barack Obama, who will be in Seoul on April 25 and 26, offered his "deepest sympathies" to the victims' families.

"Our hearts ache to see our Korean friends going through such a terrible loss, especially the loss of so many young students," he said.