Archbishop of Canterbury: Marriage equality could be 'catastrophic' for African christians 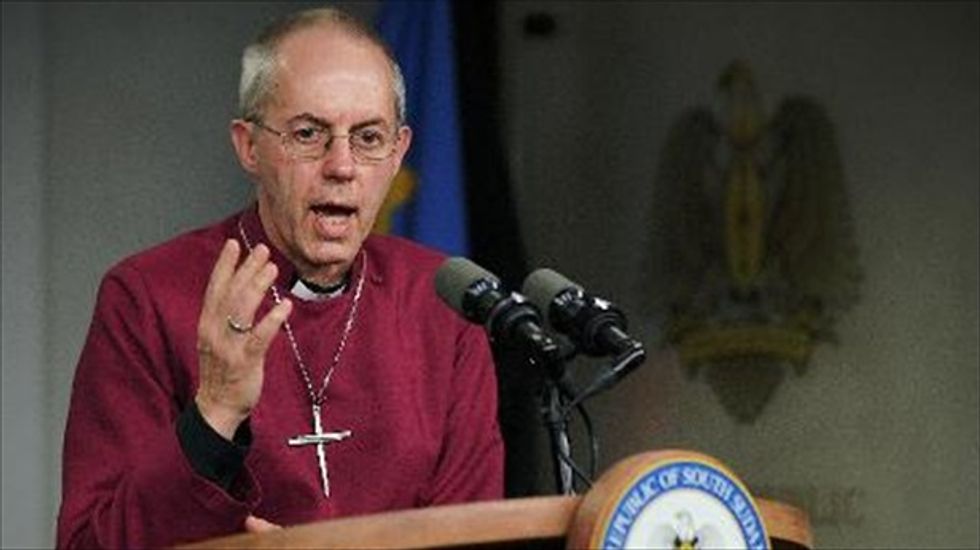 Archbishop of Cantebury Justin Welby at the State House in Juba, South Sudan, on Jan. 30, 2014 [AFP]

Justin Welby, the leader of the world's Anglicans, warned Friday that if the Church of England accepted gay marriage, it could prove "catastrophic" for Christians in Africa.

The Archbishop of Canterbury, who is the spiritual head of the Anglican Communion's mother church, warned that doing so could potentially lead to massacres of Christians.

Gay marriage became legal in England and Wales on March 29, with the first couples tying the knot after the stroke of midnight.

Religious organisations can opt in. However, the Church of England, the state church, is barred from performing same-sex marriages to provide it with an additional layer of legal protection.

"What we say here is heard around the world," Welby told LBC radio.

"Why can't we just do it now? Because the impact of that on Christians in countries far from here, like South Sudan, like Pakistan, Nigeria and other places, would be absolutely catastrophic, and we have to love them as much as we love the people who are here."

Anglicans -- who number 80 million -- "are one of the great international groups that there is in this world, we are massively majority not (to be found) in England."

Welby said he recently visited a mass grave of 369 bodies in South Sudan where it was believed that "if we leave a Christian community here we will all be made to become homosexual and so we will kill all the Christians".

"I've stood by a graveside in Africa of a group of Christians who'd been attacked because of something that had happened far, far away in America," he said.

"That burns itself into your soul, as does the suffering of gay people in this country," he added.

He said that the church had to listen "incredibly carefully" to gay communities in England, but also study scripture, "which is definitive, in the end", before drawing conclusions.

"I really don't want to say no to people who love each other but you have to have a sense of following what the teaching of the church is. We can't just make sudden changes."

On his four-nation tour of Africa earlier this year, the former oil executive wrote to the presidents of Nigeria and Uganda warning against the "victimisation or diminishment" of homosexuals.