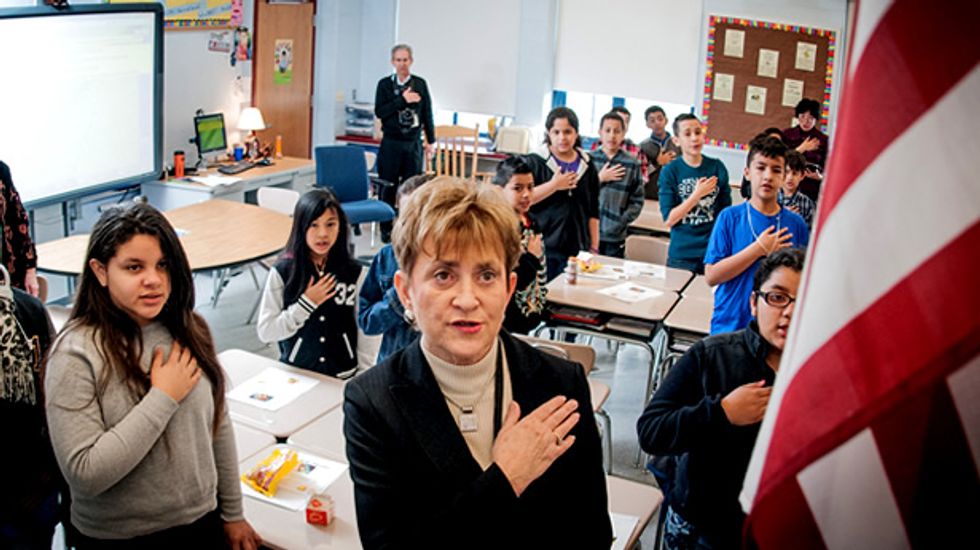 On Saturday, the American Humanist Association filed a lawsuit in New Jersey on behalf of an atheist family seeking to erase the phrase "one Nation under God" from the Pledge of Allegiance.

According to the lawsuit, "John Doe and Jane Doe are atheists...who have personally experienced the public's prejudice against atheists." They have been told they are "arrogant for not believing in God," and "Doechild is...aware of unfavorable public attitudes toward atheism, and has in fact been personally confronted and shouted at in response to his openly identifying as atheist."

Because of this, John and Jane Doe do not believe Doechild -- who attends a public school in the Matawan-Aberdeen Regional School District -- should be forced to recite the Pledge of Allegiance on a daily basis, as that forces Doechild into a position in which classmates will come to recognize that he is a non-believer.

David Niose, an attorney for the American Humanist Association’s Appignani Humanist Legal Center, said in a statement on Monday that "[p]ublic schools should not engage in an exercise that tells students that patriotism is tied to a belief in God. Such a daily exercise portrays atheist and humanist children as second-class citizens, and certainly contributes to anti-atheist prejudices."

According to the lawsuit, "[p]laintiffs have suffered and continue to suffer actual harm as a direct and proximate result of the Defendants' policies and actions of conducting the regular classroom Pledge exercise as described, for the exercise publicly disparages Plaintiffs' religious beliefs, calls Plaintiffs' patriotism into question, portrays Plaintiffs as outsiders and second-class citizens, and forces Doechild to choose between nonparticipation in a patriotic exercise or participation in a patriotic exercise that is invidious to him and his religious class."

Philosophically, John and Jane Doe object to the fact that the Pledge's "'under God' language sends a message to public school children, and indeed to the general public, that the government favors belief in God."

A similar case, also being forwarded by the American Humanist Association, is currently awaiting a decision before the Massachusetts Supreme Judicial Court.