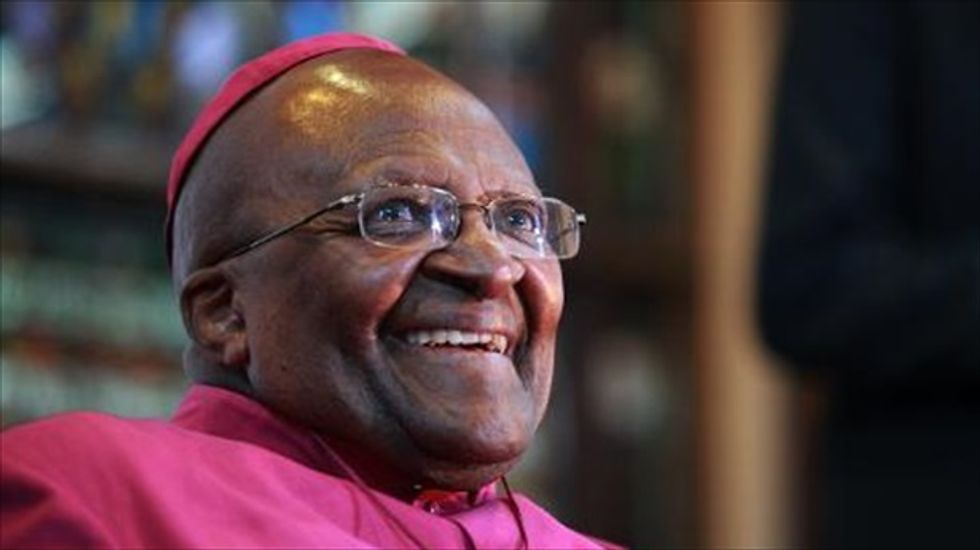 Nobel peace laureate Desmond Tutu Wednesday celebrated 20 years of freedom in South Africa as a "heck of an achievement", while confirming that he would not vote for the ruling party in upcoming elections.

Anglican archbishop emeritus Tutu, 82, is still regarded as a moral beacon for South Africa in the mould of the first post-apartheid president Nelson Mandela, who led the country from 1994 to 1999.

But he has been openly critical of current President Jacob Zuma's graft-tainted administration and said last year he would no longer vote for Mandela's African National Congress (ANC).

At a news conference in Cape Town's St George's cathedral, however, he chose to highlight the positives in a country once ruled by the racist apartheid ideology which earned it the sobriquet "polecat of the world".

"We should pat ourselves on our backs when you think where we have come from," he said, breaking into his characteristic cackle.

He said he sometimes stopped and simply watched children of all colours heading for the same school on a weekday morning -- something unimaginable in apartheid South Africa.

But, while he avoided direct criticism of Zuma and the current ANC government, he said they did not match up to Mandela -- who died in December -- and the other liberation leaders around him.

"We have to admit that not too many of the successors of those leaders have been able to fill their shoes. But the shoes were enormous."

Tutu, whose speeches and interviews are often filled with wisecracking humour, was hesitant in answering many questions after saying he did not want to be accused of trying to influence the May 7 vote so close to the elections.

But when pressed he did indicate, if indirectly, his discontent with the corruption in government and the lingering poverty in the country, saying it was a "disgrace" that people went to bed hungry.

Although close to the ANC during the years of struggle against white-minority rule -- Mandela spent his first night as a free man after his release from prison in Tutu's home -- the archbishop said last year he would no longer vote for the ruling party.

"I didn't struggle in order to remove one set of those who thought they were tin gods and replace them with others who are tempted to think they are," he once said of South Africa's new leaders.

At the news conference on Wednesday he said: "I have said I won't vote for them and say it with a very heavy heart."

Next month's national elections are seen as a test of whether corruption, arrogance and enduring poverty after 20 years of ANC rule will hurt the party credited with ending apartheid.

The clergyman's refusal to vote for the ANC has been echoed in the run-up to the election by a group of former ANC stalwarts led by former intelligence minister and communist party member Ronnie Kasrils.

The group called last week for voters to choose one of the smaller opposition parties or spoil their ballots in protest against what they see as a betrayal of the ANC's principles.

Tutu told the news conference they were simply trying to dissuade people from being "voting cattle".

The ANC is, however, expected to win the election easily -- riding on its "struggle" credentials -- but possibly with a reduced majority.