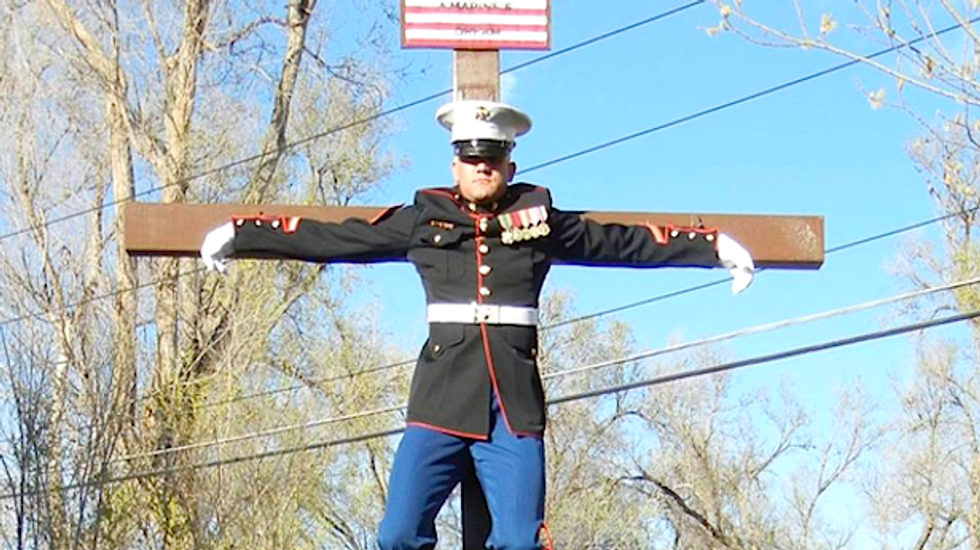 A former Marine protested his court martial and discharge Sunday by “crucifying” himself Easter Sunday across from the Colorado state capitol, where about 60,000 people were celebrating the 4/20 unofficial holiday of marijuana users.

Joshua Klohr believed he was unfairly pushed into the court-martial proceedings, which he called a sham, and demonstrated his displeasure by donning the Marine Corps dress blue uniform and hanging himself from a replica cross, reported the Marine Corps Times.

Klohr was demoted to private, sentenced to a month in the brig, and discharged from the Marine Corps last year after his conviction for subordinate conduct, disobeying a superior officer, and failure to obey an order.

The former Marine recruiter in Boulder said he struggled to meet his goals, despite working 14 to 16 hours a day.

He refused to “fraud” enlistees into the Marines by ignoring factors that might disqualify them for service, and his superiors eventually interpreted his failure as quitting.

Klohr complained that he was not allowed to testify on his own behalf at trial and was quickly found guilty.

The former Marine admits he did not tell his own recruiters that he’d been expelled from school, had asthma, and a criminal record when he joined the Corps.

Klohr was charged in 2005, when he was 18, with setting a cat on fire and throwing it from a roof in Denver.

A photo of his demonstration circulated this week on social media, but Klohr has found little support for his claims.

“Dude was butt hurt over being court martialed,” one commenter wrote on the Marine humor page Just The Tip Of the Spear. “He just wanted the shock value, so people would pay attention to his whining.”

Klohr told the Marine Corps Times that he stayed on the cross for an hour, attached by a harness and hooks for his arms.

He said about 30 people had stopped by to read some of the binders filled with court documents and other information.

Klohr said the reaction was disappointing, and he regrets the demonstration.

“I don’t want people to talk me up on websites as this disrespectful person,” he said. “I wasn’t trying to be disrespectful or anything.”

But he still hopes to receive a presidential pardon and expose what he calls unrealistic standards and unethical recruiting practice by the Marine Corps.

Non-active service members are prohibited by federal law from wearing the Marine uniform, with specific exceptions, but Klohr does not meet those because he received a punitive discharge from the Corps.

A spokesman for the service branch said it would be up to federal prosecutors to pursue charges against Klohr.