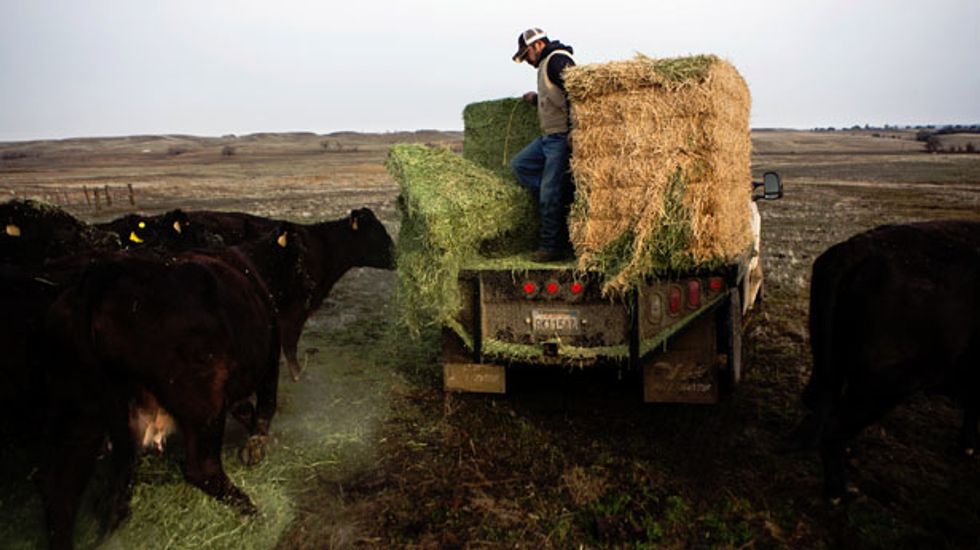 By P.J. Huffstutter and Tom Polansek

(Reuters) - For decades, ranchers from the east have brought their livestock to California, where mild winters and lush natural pastures created prime conditions for fattening beef cattle.

No more. In the midst of the worst California drought in decades, the grass is stunted and some creeks are dry. Ranchers in the Golden State are loading tens of thousands of heifers and steers onto trucks and hauling them eastward to Nevada, Texas, Nebraska and beyond.

"If there's no water and no feed, you move the cows," said Gaylord Wright, 65, owner of California Fats and Feeders Inc. "You move them or they die."

The exact headcount for livestock on this cattle drive is not known. But a Reuters review of state agriculture department records filed when livestock cross state borders indicates that up to 100,000 California cattle have left the state in the past four months alone.

California has shipped out cattle before, but the current migration is far bigger and includes more of the state's breeding stock, which give birth to new calves and keep operations running year after year, said Jack Cowley, a rancher and past president of the California Beef Cattle Improvement Association.

That could be doing outsized damage to the nation's 18th-largest cattle herd, since California ranchers will have difficulty rebuilding once the drought breaks, said cattle ranchers and area livestock auctioneers.

"We spend a lifetime building the herd the way we want," said Cowley. Two weeks ago, he sold 18 percent of his breeding herd, or 200 cattle, to an operation in Nevada because he did not have enough water. He expects he will need to sell another 200 cattle.

Beef prices already are at record highs, and increased transportation costs and rising uncertainty about where - and how many - future cattle will be raised and processed are adding upward pressure, industry analysts say.

The national cattle herd is at a 63-year low because high grain prices and drought during the past several years have encouraged producers to send animals to slaughter early and to reduce herd sizes.

There are some signs of change. In places where the drought has eased, or where ranchers are willing to gamble that rain will fall, some producers have started holding back breeding heifers and female calves from the slaughterhouses, according to government data released on Friday. But they are buying California cows, too.

The California exodus also underscores a little-noticed development in the U.S. beef industry: the evolution of an increasingly mobile livestock herd, which must travel ever-greater distances to feedlots and slaughterhouses as the industry consolidates.

The last major slaughterhouse near the California-Mexico border, National Beef Packing Co's plant in Brawley, California, plans to close on May 23. The drop in available cattle sparked the move, National Beef said, and some ranchers in southern California say they will need to cross state lines in order to reach the next-closest packing house.

The Brawley plant could process 1,900 head of cattle a day, or about 2 percent of U.S. slaughter capacity, according to industry analysts. But with feedlots closing in the region, the plant couldn't be assured of a steady supply of livestock.

"The fact is, this migration cycle is going to bring about even more consolidation," said Curt Covington, senior vice president for the Ag and Rural Banking Division at Bank of the West.

"Unless you see Noah come out to California with a boat, you're not going to see these cattle come back here any time soon," Covington added.

The top destination appears to be Texas, long the nation's largest cattle producing state. Buyers this year have hauled in more than 47,400 California cattle, a 71 percent jump over the previous year's first quarter, according to state agriculture department data.

"Some of our California cows are going to be Texans. There's no way around it," said cow-calf producer Tim Koopman, president of the California Cattlemen's Association and livestock auctioneers. "The sell-off is not over yet."

Nebraska, home to more cattle in feedlots than any other state, also has joined in. More than 14,000 California cattle arrived in the first quarter of this year, compared to just 542 cattle that made the trek in the same period of 2013, according to state records.

Many of the cattle crossing state lines are doing so at lighter weights than normal, due to the scarce water and high feed prices.

Wright, the cattle buyer, said he saw one client bring his beef herd back to auction weighing 40 pounds less than when he bought them in January. Yet lighter-weight cattle have a surprising appeal to some out-of-state buyers: more cattle per truckload.

"If your truck can haul 50,000 pounds on the trailer, you can transport 50 cows that weigh 1,000 pounds, or 100 calves that weigh 500 pounds," Wright said. Once they arrive and are fattened up, the larger number of head can translate into increased profits for the new owners.

Still, the long distances can cause unhealthy stress for the animals. Wright said he lost a newborn calf during a nearly 1,600-mile trek to Texas last winter even though his driver stopped to nestle it in bedding.

"It still froze to death," Wright said. "I'll never do that again."

But the business imperative persists. Bill Brandenberg, owner of the Meloland Cattle Co in El Centro, California, said his company's survival depends on his ability to move cattle to states where food and water are less expensive.

The Texas herd fell 11 percent last year, or 1.4 million head, the biggest decline in nearly 150 years of recorded data, and the influx from California will not be enough to reverse the trend. The shrinking herd prompted Cargill Inc last year to shut its plant in Plainview, Texas, capable of slaughtering 4,500 cattle a day.

Hereford, Texas, which bills itself as the Beef Capital of the World, has seen truckloads of California transplants this year.

The Bar-G Feedyard just outside of town recently took in a 164-head delivery from a customer who wanted to move them before the Brawley slaughterhouse closed, assistant manager Kevin Bunch said.

"He got scared," Bunch said, and shipped the animals to Texas to ensure he could eventually sell them for slaughter.

(Reporting By P.J. Huffstutter in central California and Chicago, and Tom Polansek in Hereford, Texas, and Chicago. Additional reporting by Lisa Baertlein in Los Angeles; editing by David Greising and Peter Henderson)