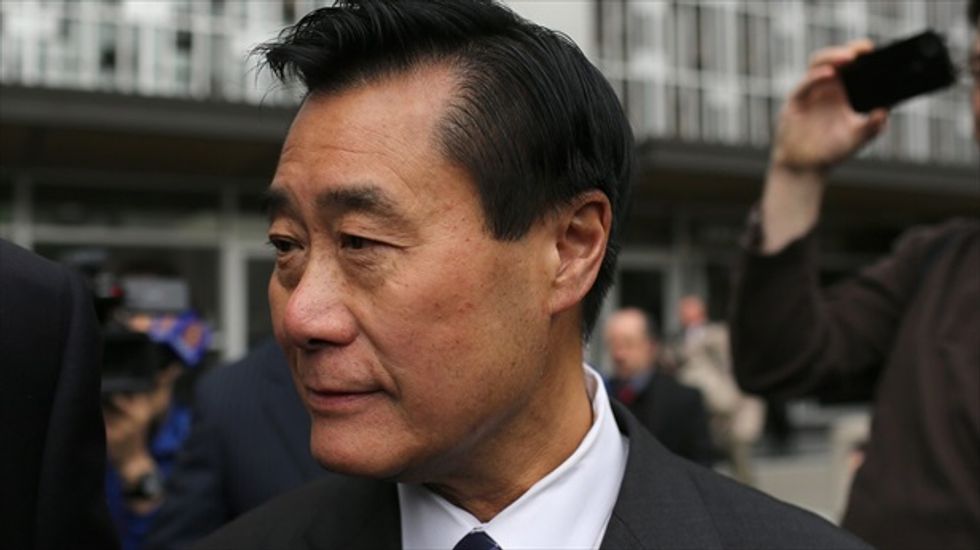 SACRAMENTO, California (Reuters) - Stung by a string of corruption charges against state lawmakers, California Democrats on Tuesday canceled a golf fundraiser that costs as much as $65,000 per foursome, saying it was time to re-evaluate the relationship between governing and raising money.

Three members of the state senate, all Democrats, have faced criminal charges since January in separate cases involving bribery, voter fraud and weapons trafficking in a series of scandals with immediate political implications in an election year.

"These are unprecedented times and they demand that we take a step back and take stock of how we all do the people's business and balance it against the demands of running for office," the legislature's top Democratic senators, Darrell Steinberg and Kevin de Leon, said in a joint statement.

The party, which dominates both houses of the legislature and holds all statewide offices, effectively lost its precious two-thirds majority in the senate last month, when Ron Calderon, indicted on corruption charges, and Roderick Wright, convicted of lying about living in the district he sought to represent, were placed on paid leaves of absence.

Last week, after the third senator, Leland Yee of San Francisco, was charged with corruption and conspiracy to traffic in firearms, the senate moved to suspend all three - further eroding Democrats' majority as the party scrambled to repair its image.

Citing the scandals, the incoming and outgoing Democratic leaders in the state senate said they were canceling the golf weekend, a signature fundraising event that had been slated to begin Friday at the tony Torrey Pines resort near San Diego.

"In light of the very recent and extraordinary breaches of the public's trust by three individuals, Senate Leadership has decided to cancel this year's Pro Tem Cup," Steinberg and de Leon said in their statement.

Instead of partying in La Jolla, senators would instead spend the weekend in their districts, "having an open and public conversation with our constituents about the work ahead," the two lawmakers said.

Senate Republican leader Bob Huff was not immediately available for comment, a spokesman said, and a second Republican senator contacted by Reuters also did not comment.

For decades, Democratic legislators in the most populous U.S. state have raised money with golf tournaments benefiting the broader party apparatus and used to pay for campaign mailers and other expenses during election years.

The party does not release figures for the amount of money raised, but a source who is close to the event said the invitation offers golf packages ranging from $15,000 to $65,000.

Sherry Bebitch Jeffe, a political analyst at the University of Southern California, said the cancellation appeared to be a pre-emptive move by Democrats hoping to avoid questions about the three senators as they hobnobbed with lobbyists.

"They would have gotten pounded between the ears if they had gone on with the golf tournament," Jeffe said. "It's more ammunition for media criticism, for Republican criticism. And we are coming very, very close to the elections this year."

The announcement that the golf tournament would be canceled came hours after FBI agents searched a legislative office in Sacramento that was used by Yee, the most recent senator to face charges.

The search was the second in the California capital in a week to target Yee and the third targeting a lawmaker in the past year. It was carried out by the FBI at the request of senate leaders, Steinberg spokesman Rhys Williams said.

"The senate wanted to make sure no stone was unturned," Williams said.

FBI spokeswoman Gina Swankie confirmed that the agency executed a search warrant in the building, but did not provide further details.

Yee, who was arrested along with a campaign consultant and more than two dozen others in a broad FBI sweep, plans to plead not guilty to corruption and firearms charges at a federal court hearing currently set for April 8, his attorney said.

A grand jury indictment that could include additional or modified charges against Yee, who was charged criminally with two felony counts of conspiracy to traffic in firearms and six corruption counts in federal court last week, is expected as soon as Thursday, attorney Paul DeMeester said.