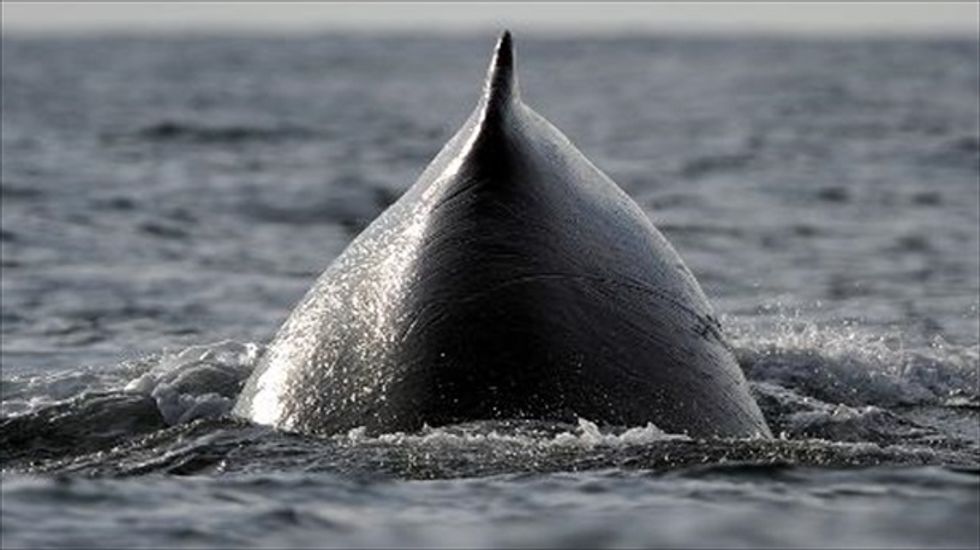 The tail of a humpback whale emerges from the surface of the Pacific Ocean in Colombia, on July 22, 2011 [AFP]

Environmentalist activists on Tuesday decried Canada's downgrading of humpback whale protections, suggesting the decision was fast-tracked to clear a major hurdle to constructing a pipeline to the Pacific Ocean.

The government however denied it is playing pipeline politics with the whales.

Ottawa announced over the weekend the reclassification of humpback whales as a "species of special concern" rather than "threatened."

As a result, the humpback's "critical habitat" off Canada's west coast will no longer be legally protected, states a federal government notice published in the Canada Gazette.

Jay Ritchlin of the David Suzuki Foundation told AFP that the decision was taken "incredibly fast."

"That it is happening right at the same time that a major development (the Northern Gateway pipeline) is being proposed is a reasonable concern," he added.

The opposition New Democrats also accused the ruling Tories of acting "to please their friends in the oil industry and pave the way for the Northern Gateway pipeline."

The government however insisted that it was simply "following the advice of an independent body of experts."

The humpback was listed as threatened in 2005, based on a 2003 assessment by a scientific advisory panel, which concluded its population was in the "low hundreds," according to the government.

The figures were revised in 2011, concluding that the population had in fact grown since the end of commercial whaling off Canada's west coast in the 1960s, and now totalled more than 18,000.

A reclassification was recommended then, but a decision was delayed to allow for more analysis.

The David Suzuki Foundation and others warned during last year's public hearings on the Northern Gateway pipeline proposal that plans to mitigate shipping's impact on the whales was inadequate.

Whale proponents worry that the increased ship traffic in the region will result in more collisions with whales, and engine noises disrupting the whales' migration and feeding.

"The whales have made a recovery and their population is growing," Ritchlin acknowledged. But, he added, it's too soon to remove their habitat protections.

Enbridge Inc.'s Northern Gateway project aims to move 525,000 barrels of crude per day from Edmonton, Alberta across 1,178 kilometers (732 miles) of rugged mountain landscapes to a new marine terminal in Kitimat on British Columbia's northern coast, for shipping to Asia.

Up to 220 supertankers would use the terminal each year, one report estimated.

A final decision on whether to allow the project to proceed now rests with the federal cabinet, which has until July 2014 to announce its decision.