Colbert: Clemency for crack offenders unfair to GOP because bankers only snort cocaine 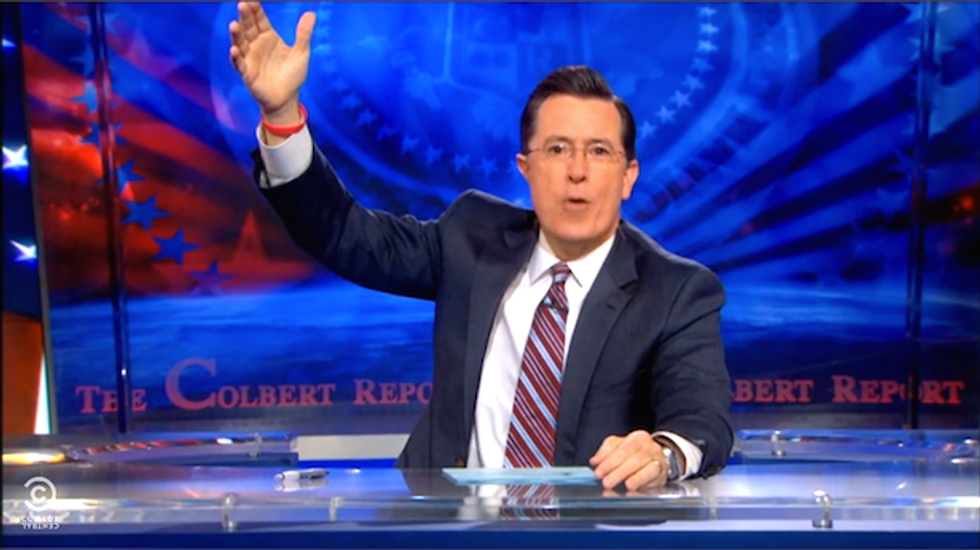 "Our criminal-coddling president doesn't share my taste for unyielding justice," Colbert began. "His latest move makes me want to turn in the badge that I made for myself."

He then plays a series of clips about the Justice Department's decision to seek clemency for those punished under harsher sentencing laws.

"Why are we being subjected to this jailhouse crock?" he asked. "It's all part of a comprehensive effort to role back 'long mandatory minimum sentences meted out after the crack-fueled crime wave of the 1980s.'"

"Great, now all these '80s thugs will be on the streets with their one-strapped overalls and giant clocks around their necks," he said as images of Will Smith on The Fresh Prince of Bel-Air and Public Enemy's Flavor Flav appeared beside him.

He noted that the proposed sentencing changes are the result of the Fair Sentencing Act of 2010, which was intended, in part, to "reduce the 100-to-1 disparity between sentences for crack cocaine offenses and those for powdered cocaine."

"Huge mistake," Colbert said. "They might be the same drugs," he said, faking a snort with one nostril. "But there's something about crack offenders that makes them seem more -- convictable," he added, pointing at his face.

"We all know that there's a sinister motive behind applying the law equally," he said before cutting to a Fox News clip in which a blonde woman began talking about these "'get out of jail free' cards from President Obama."

"Is it compassion," she asked, "or clever politics."

A male commentator then added that because it's "2014 and the midterm elections are coming up, this is a way [for Obama] to amp up his base."

"That's right," Colbert chimed in. "Obama's clearly just rallying the liberal base by releasing drug dealers. It's totally unfair! Republicans can't rally their supporters that way, because there are no bankers in jail."

Watch the April 29, 2014 episode of The Colbert Report via Hulu below.