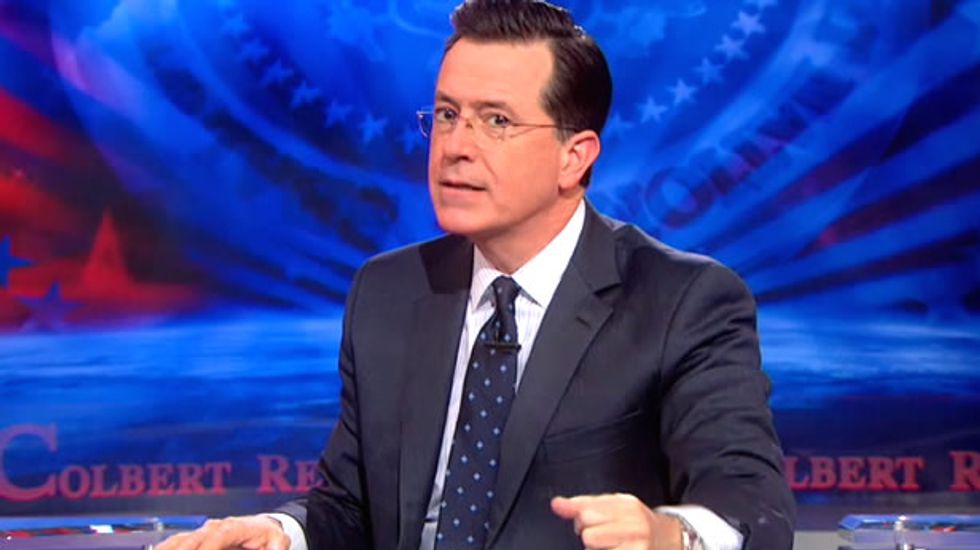 Wednesday night's episode of The Colbert Report featured a segment of "The Word" in which he discussed the real problem with execution-drug scarcity -- that the public heard about it.

Last night's "word" was the phrase "silent, but deadly," which Colbert said pertained to a new Tennessee law "that allows the state to withhold all kinds of information from the public, including the type of drugs the state plans to use."

"Because if they keep it secret," Colbert continued, "they could use anything. Sodium pentobarbital, sodium and Barbasol, Diet Coke and Mentos, 'the Cinnamon Challenge.'"

"The new law also allows Tennessee to never disclose who the drug manufacturer is, which is very important, because the new drug they want to use, sodium pentobarbital, is not available from any legal drug manufacturer," he said. "You know you're getting quality product when the slogan is, 'Don't tell anyone where you got this.'"

He then implored his audience not to worry, assuring them that "the spokesman for the Tennessee Department of Corrections says, 'We are confident we will be able to secure the drug when necessary.'"

"Yes," Colbert replied. "They will be able to get the drug, either from a reputable licensed pharmacist, or from a guy loitering under the overpass named 'Spider.'"

He conceded that, "eventually, the public has a right-to-know," but worried about the potential violation of his own personal "right-to-I'd-rather-not-know."

"Fortunately, Tennessee's new law also makes it impossible to know 'exactly who will carry out the executions," which is "great, because Americans support the death penalty, but don't want to know how 'the sausage is made.'"

"And by the way," Colbert said, "until we know how they're killing people, I'd stay away from Tennessee sausage."

Watch the entire episode of The Colbert Report on Hulu below.