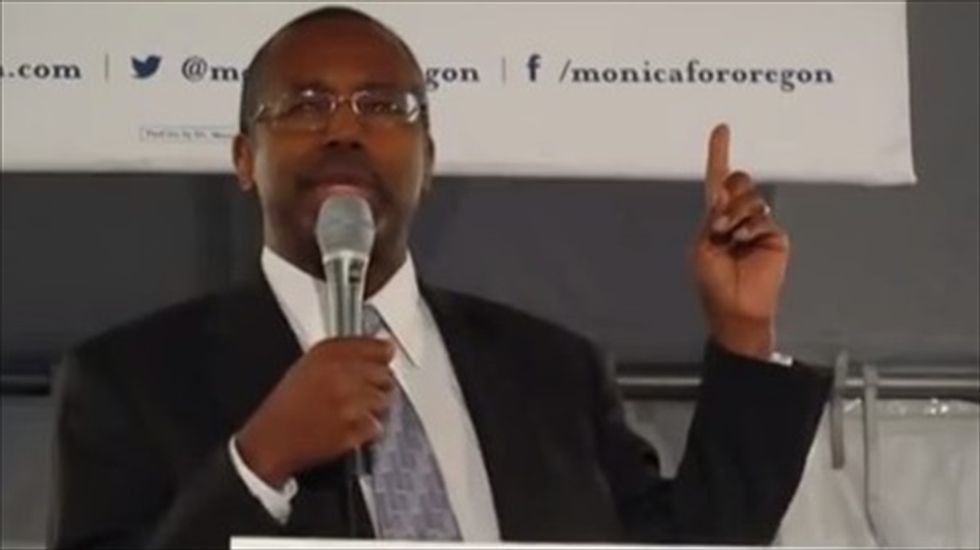 WASHINGTON (Reuters) - If money is any indication, a prominent Baltimore doctor with no political experience is an early front-runner in the 2016 U.S. presidential race.

A group encouraging retired neurosurgeon Ben Carson to run for president raised $2.4 million in the first three months of this year, more than the group backing Hillary Clinton or those affiliated with Rand Paul, Marco Rubio and other potential candidates, according to filings with the Federal Election Commission.

Carson, 62, has emerged as a prominent African-American conservative commentator. He appears regularly on Fox News and writes a weekly column for the conservative Washington Times newspaper.

Carson's spokesman says he is not interested in running for president and he is not affiliated with the National Draft Ben Carson for President Committee.

The money is a sign that conservative voters are looking beyond the usual political suspects for a presidential candidate, the head of the Ben Carson committee said.

"My gut tells me that the American people are looking for a citizen statesman, for a non-politician," said John Philip Sousa IV, a descendant of the "Stars and Stripes Forever" composer who serves as the group's chairman.

The first doctor to successfully separate twins conjoined at the head, Carson developed a conservative following last year after he advocated a flat tax, private medical savings accounts and other conservative policies at a National Prayer Breakfast speech that was attended by President Barack Obama.

On his website, realbencarson.com, he has posted a video that explains "the first thing I'd do if I were ever president."

Armstrong Williams, who works as Carson's business manager, said the video did not indicate that Carson was considering a presidential run. "Many of us talk about what we would do if we were president," he said.

"There is no interest in running for president," Williams said. "If the Lord speaks to him and says to him to run, then that's a different story. But I don't know a lot of people in the world who the Lord has spoken to directly."

Though the Draft Ben Carson committee has raised $3.9 million since it was set up last year, it has spent money just as steadily. At the end of March, the committee had $228,000 in the bank and carried $515,000 in debt, according to a filing with the Federal Election Commission.

Much of that money has gone to direct-mailing and fundraising groups, including one affiliated with the group's treasurer. The committee has also paid for ads on conservative radio shows and a website, www.runbenrun.org.

Other political committees are spending heavily as well. Ready for Hillary, a group laying the groundwork for a potential presidential run by Hillary Clinton, has spent $4.9 million of the $5.7 million it has raised over past two years. The committee had $857,000 in the bank at the end of March.

Sousa said the Ben Carson committee, which has five paid staffers, is trying to build a ready-made campaign that it could turn over to Carson in case he decides to run.

"Without us building this and saying, 'Here are the keys to the car,' he'd be dead in the water," Sousa said.