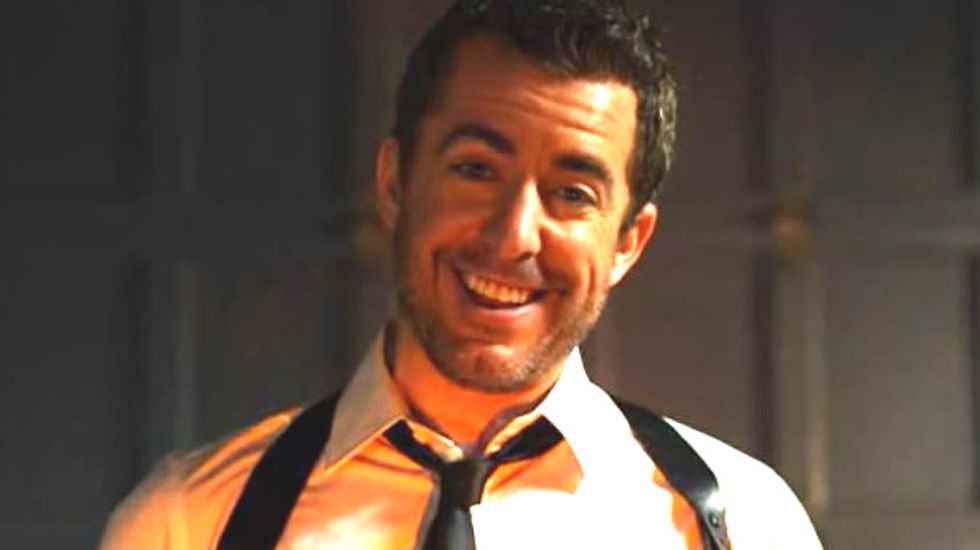 He began by discussing the most innocuous of these ads, by candidate Sen. Joe Manchin of West Virginia, who used a high-powered rifle to "murder the cap and trade bill."

"But of course, like any great innovator," Jon Stewart said, "Manchin has had his imitators."

The show cuts to a clip of self-styled "Conservative Republican" Ron Gould, whose ad features him shooting a copy of the Affordable Care Act into the air using a clay pigeon thrower, and then shooting it mid-flight with a hunting rifle.

After noting that laws "are not like a horcrux from Harry Potter, where if you destroy it, the thing it represents is gone forever. That would be a very big hole in the system."

"'Oh my God, I spilled coffee on the Thirteenth Amendment! Black people are slaves again!'"

"No, it doesn't work that way. But I wonder now that we're back in the bill-shooting season, I wonder if we'll see any ads that out batshit the previous ones."

He then throws to an ad by Will Brooke, who claims he wants "to talk about two serious subjects -- the Second Amendment, and to see how much damage we can do to Obamacare."

Brooke then proceeds to shoot the Affordable Care Act with an increasingly powerful arsenal of weaponry until Stewart interjects, asking, "When did opposing health care become the Sonny death-scene from The Godfather?"

"These candidates-shoot-a-law ads are like Die Hard sequels," Stewart says, "each one is going to be crazier and more desperate than the last. It's hard to imagine what could come next -- well, not that hard."

Daily Show correspondent Jason Jones then stars in an ad that perfectly parodies the infamous torture scene from Quentin Tarantino's film Reservoir Dogs, and ends with the candidate's promise that he will "skullfuck any bill Obama passes."

Watch the entire episode of The Daily Show via Hulu below.

Donald Trump on Wednesday declined to answer questions under oath in New York over alleged fraud at his family business, as legal pressures pile up for the former president whose house was raided by the FBI just two days ago.

Trump said he had "no choice" but to invoke the fifth amendment, which allows individuals to remain silent to protect against self-incrimination under questioning.