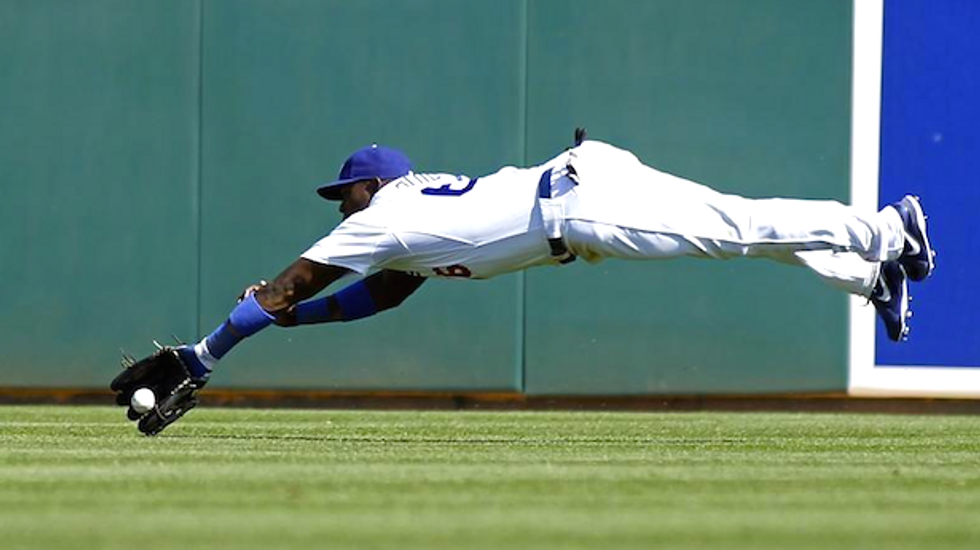 As young Cuban slugger Yasiel Puig is earning millions on the baseball field with the Los Angeles Dodgers, a bizarre story of how the talented player escaped from the Communist-ruled island country is unfolding in U.S. court documents.

Puig ran a gauntlet of fast boats, Mexican drug smugglers and even death threats in his 2012 flight from Cuba, according to a $12 million lawsuit filed by a man who accuses the ballplayer of informing on him to Cuban authorities.

Puig has declined to comment on the allegations and his lawyer has filed a motion to have the case dismissed.

"I'm only focused on being a productive teammate and helping the Dodgers win games," Puig was quoted as saying in a statement issued by his agent.

A rookie sensation with the Dodgers last season, Puig succeeded in leaving Cuba two years ago by taking a boat to Mexico supplied by smugglers connected to the Zetas drug cartel, according to the affidavit of Yunior Despaigne, a Cuban boxer who fled the island with Puig.

The affidavit is part of the lawsuit filed in a Miami federal court by Miguel Angel Corbacho, a resident of Havana.

Corbacho alleges he was tortured and sentenced to seven years in prison in Cuba in 2010 after Puig wrongly told police that he was part of a conspiracy to smuggle the ballplayer off the island.

"Our client wasn't a smuggler," said Corbacho's attorney Kenia Bravo, saying he was accidentally swept up in Puig's earlier efforts to be smuggled out of Cuba.

Corbacho served more than three years in jail in Cuba and is now out on probation.

Puig, now 23, tried several times to leave Cuba after he was banned from Cuban baseball in 2009 for trying to leave the island illegally.

Despaigne also accused Puig of being an active government informant, and sending other would-be defectors to jail in exchange for government perks.

According to Despaigne, a group of Miami-based smugglers put up $250,000 to smuggle Puig off the island in exchange for a portion of his future professional earnings.

Puig achieved that goal when he signed a seven-year, $42 million contract with the Dodgers in 2012.

The details of Puig's mystery escape from Cuba were first reported in the May issue of Los Angeles Magazine.

The plan was to first get Puig to Mexico where he could establish residency and become a free agent to entertain higher offers from professional baseball clubs, according to Despaigne's affidavit.

Once in Mexico, however, "smugglers concluded that Puig would be worth more money and demanded that the Miami investors pay them $400,000 which the backers insisted they did not have," said Despaigne, adding the smugglers also threatened the 6-foot-3-inch Puig with a machete.

Puig, Despaigne and three others were held by the smugglers for nearly a month in an Isla Mujeres hotel until they were rescued and completed their journey to the United States, according to the affidavit.

Despaigne, who ended up in Miami, said Puig paid more than $1 million to a trio of Miami men, though the smugglers went unpaid, according to the affidavit.

"One of the smugglers, Leo, sent a man to come and find me and to deliver a message to Puig," Despaigne said in the affidavit. "The man pushed me up against my car and pressed a pistol to my liver and told me to tell Puig that if he didn't pay them, that they would kill him."

Despaigne said Puig took the story to one of the men who financed his exodus from Cuba, who said he would have Leo "neutralized," according to the affidavit.

Puig went on to bat .319 in his first season with the Dodgers and was the runner-up for the Rookie-of-the-Year award in MLB's National League.

But his early promise has soured a bit this season as Puig's batting average has slipped and he was benched by the Dodgers on opening day for arriving late to the ballpark.

Off the field, police twice arrested him in 2013 for reckless driving, charges that were later dropped.