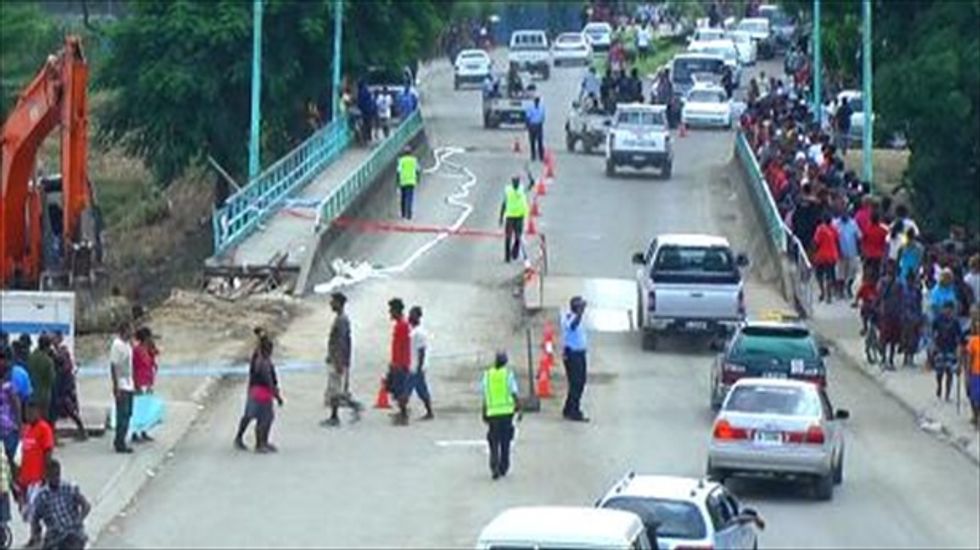 Police officers control traffic passing over Mataniko Bridge amid concern it could collapse in the Solomon Islands capital of Honiara on April 6, 2014 [AFP]

The flood-ravaged Solomon Islands was facing a new threat Monday as the first signs of disease emerged in camps sheltering thousands of displaced residents in the capital Honiara, aid workers said.

The official death toll stands at 21 after flash floods tore through the city last Thursday. But Save the Children's Graham Kenna said the number of fatalities was certain to rise as hopes faded for another 30-40 people still listed as missing.

"We know that the missing people are not going to be found," he told AFP. "They're still scouring the waters off Honiara for them and they won't be coming home.

"Now the main concern is disease. If there's a major outbreak here a lot of people are going to get very sick or worse."

Kenna said about 50,000 people across the island of Guadalcanal had been displaced, with some 10,000 taking shelter in camps in Honiara where hygiene was poor despite the best efforts of aid agencies.

He said cases of diarrhoea and conjunctivitis, both regarded as early indicators that populations are vulnerable to more serious diseases, had already been reported in the city, which was already a hotspot for the mosquito-borne dengue fever

"Our biggest worry is that prior to the flooding there was already a dengue outbreak here," he said.

"Everybody's very concerned that once the place dries out a bit these dengue mosquitoes will be absolutely rampant here. People are starting to make plans for a large-scale medical emergency."

He said aid efforts were being hampered because much of Honiara's infrastructure had been destroyed in the floods, but there was some good news when a New Zealand air force Hercules carrying humanitarian supplies landed on Monday.

Kenna said more aid was on its way but the challenge was delivering it in time to stop a major outbreak in the camps.

"Assistance is coming but it's very difficult to get it in here," he said.