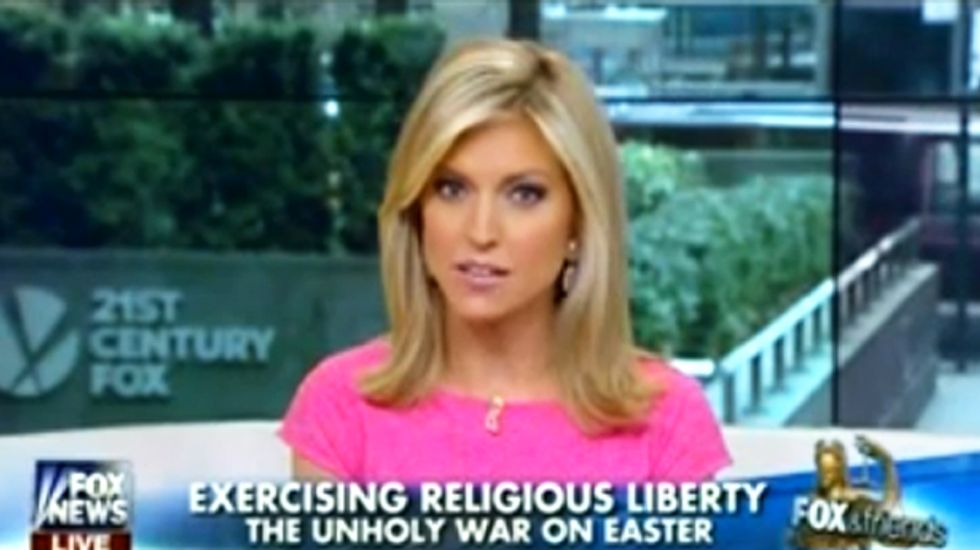 In a Fox News segment called The Unholy War on Easter, a field director from Faith and Freedom Foundation decried the lack of "class" exhibited by a separation of church and state group, comparing them to the infamous anti-gay Westboro church.

At issue is a display being set up in Chicago's Daley Plaza of two 8 foot banners featuring the secular views of Thomas Jefferson and President John Adams, with one  banner reading 'In reason, we trust,' the other reading 'Keep state and religion separate.' According to host Anna Kooiman, the banners are being erected to "counter the Jesus" in the plaza; a ten foot tall image of "the resurrected Jesus" and a 19-foot Christian cross, both already on display.

"We believe, if our public square is being taken over by a religion, we should be there too," Gaylor replied.

Turning to Galloway, Kooiman asked, "Virginia, as a Christian, what's your reaction?"

"Well, I think it is kind of sad, on the week that Christians are celebrating the most significant part of their religion, the Resurrection of Jesus Christ, and Jewish people are celebrating Passover, that we are attacked and denigrated, it doesn't feel right," Galloway said.

She goes on to say that, "They have a right to express their opinion, a Constitutional right..." before adding, "It seems without class, like the Westboro crowd and the things that they did."

Kooiman then turned to Gaylor and asks, "What about bad manners here?'

Gaylor replied, "There is no bad manners in celebrating our secular Constitution."

Galloway later complained "It's not okay to say Christians can't say anything in the public square. You can't lock us in a building and say we can't speak anywhere else."

Host Kooiman  closed the segment telling the two women, "We love you both. God bless you both."

Watch the video below, from Media Matters