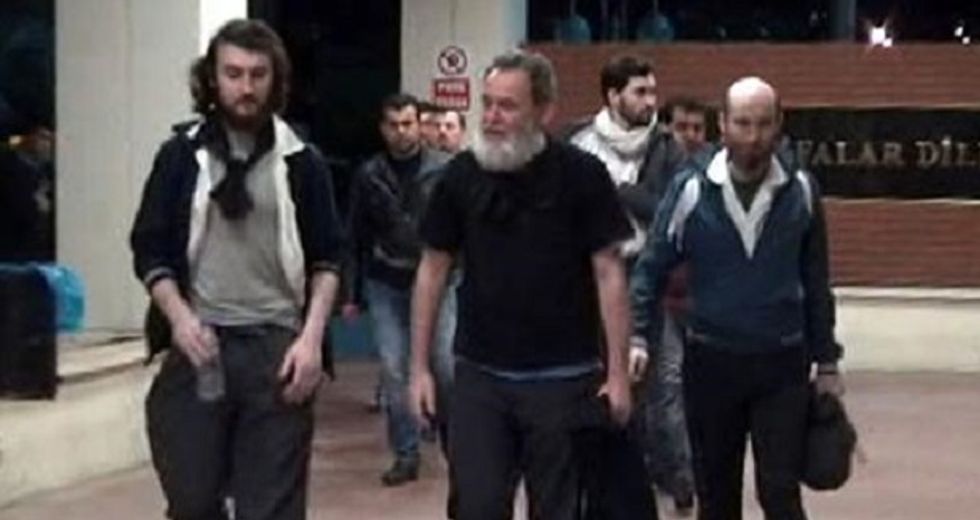 Four French journalists taken hostage in Syria last year were freed on Saturday after a 10-month ordeal in the world's most dangerous country for the media.

French President Francois Hollande announced the release of Edouard Elias, Didier Francois, Nicolas Henin and Pierre Torres, saying they were "in good health despite the very challenging conditions of their captivity".

Turkish soldiers found the four men abandoned in no-man's land on the border with Syria overnight, wearing blindfolds and with their hands bound, the Turkish news agency Dogan reported.

They had been captured in two separate incidents in June last year while covering the conflict in Syria.

Footage of the journalists broadcast on Turkish television showed them looking unkempt, with beards and long hair, but they appeared to be in good health.

"I'm very happy to be free," said 53-year-old Francois. "We thank the Turkish authorities because they really helped us. And it's very nice to see the sky, to be able to walk and to be able to speak freely."

The Turkish soldiers initially took them for smugglers but took them to a police station in the small town of Akcakle near the border when they realised they were speaking French.

Around 30 foreign journalists covering the Syrian civil war have been seized since the conflict began in March 2011, and many are still missing.

Hollande told AFP he had learnt of the liberation of the four Frenchmen "with immense relief".

"I share the joy of the families of our compatriots who have endured... the fear of this trying time," Hollande said.

Francois, a highly respected and experienced war reporter for Europe 1 radio, and photographer Elias, 23, were taken north of the main northern Syrian city of Aleppo on June 6.

Henin, a 37-year-old reporter for Point magazine, and freelance photographer Torres, 29, were seized two weeks later also in the north of the country, at Raqqa.

The four men are expected to arrive in France later Saturday or early Sunday to an immense outpouring of joy and relief.

"We don't know what to say, we are very happy obviously, but we are completely overwhelmed," Elias's grandmother Josette Dunand told AFP.

Henin's father Pierre-Yves Henin told AFP the men were "about to get on a plane to come back", and that their morale was "particularly good".

He told BFM-TV the family had been aware of recent "contacts", and had hoped they would "prove fruitful", but that the news that his son was free was nonetheless a surprise.

The head of Europe 1 Denis Olivennes described emotional scenes in the office.

"It is an immense joy, we are in tears," he said. "We have endured 10 months of terrible anxiety and anguish. Now they are freed, I have no words to describe how it feels.

"I want to thank the authorities that have permitted their liberation, all those who mobilised, the families... the list is too long," he said.

The four men's liberation comes weeks after two Spanish journalists taken hostage in Syria by an Al-Qaeda-linked group called the Islamic State of Iraq and the Levant also walked free.

They had been in captivity since September.

Thanking "all those who contributed to the successful outcome", the president said the men would return to France "in the coming hours".

He reaffirmed his "deep commitment to the freedom of the press, which demands respect for the security and integrity of journalists in their role of providing information."

Hollande said his attention was now with two other French citizens still held in the Sahel region of Africa, reaffirming his determination to obtain their release.

Among those still being held in Syria are US journalist James Foley, who had been working for Global Post, Agence France-Presse and other international media and went missing in November 2012, and Austin Tice, who disappeared in August the same year.

The New-York based Committee to Protect Journalists said in a report Wednesday that Syria was the most dangerous country for journalists, highlighting a rising number of "targeted killings" of reporters.