George W. Bush: Relations with Vladimir Putin got 'increasingly tense' over the years 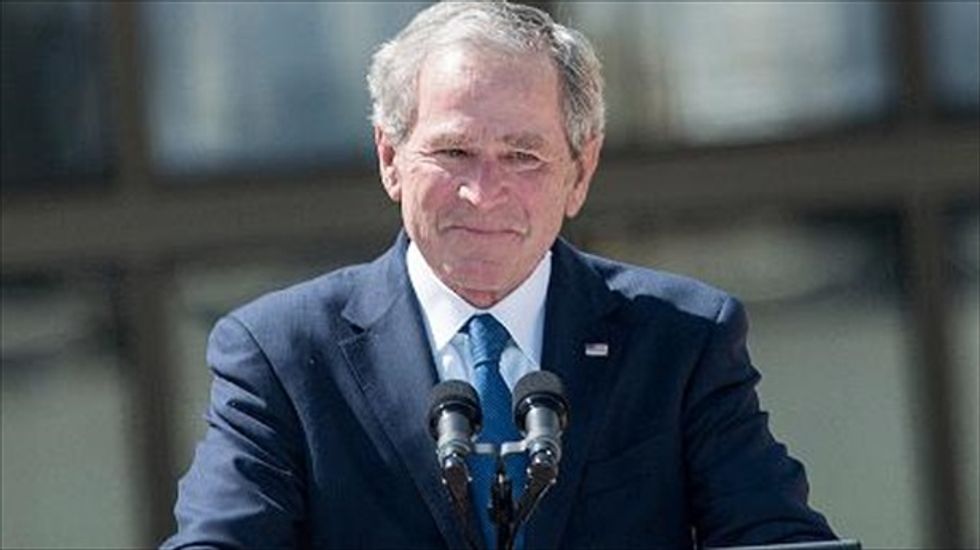 Former US President George W. Bush during a dedication ceremony at the George W. Bush Library and Museum on the grounds of Southern Methodist University in Dallas on April 25, 2013 [AFP]

Former U.S. president George W. Bush said relations with Vladimir Putin grew "increasingly tense" during his White House years, as he unveiled his portraits of world leaders, including the Russian head of state.

Putin, German Chancellor Angela Merkel, former British prime minister Tony Blair, Afghan President Hamid Karzai and the Dalai Lama are among the two dozen leaders featured in an exhibition of the paintings which opens in Texas on Saturday.

Giving his journalist daughter Jenna a sneak preview of the exhibition for NBC's "Today Show" program, Bush lingered by his canvas of a solemn-eyed Putin.

"Vladimir's a person who in many ways views the US as an enemy," Bush said. "And although he wouldn't say that, I felt that he viewed the world as, either the US benefits and Russia loses or vice versa."

"I tried of course to dispel him of that notion," he added.

The portraits are a central part of "The Art of Leadership: A President's Personal Diplomacy," which explores the relationships Bush forged with world leaders during his presidency.

The George W. Bush Presidential Library and Museum, on the campus of Southern Methodist University in Dallas, says the exhibition will run through June 3.

Prior to Friday, none of the portraits had been seen publicly -- or, for that matter, by the yet-to-be-identified subjects themselves.

Bush said he hoped Blair, his staunch ally in the Iraq war, would like the one he painted of him.

"I like it," he added. "It like it because it conveys a compassionate person and a strong person and a reliable friend."

Perhaps his favorite portrait, he said, was the one he did of his father George Bush, 89, who served as president from 1989 to 1993.

"He's a great listener, as you know, and when it came to diplomacy, he was a master at befriending people to find common ground," he said. "It was a joyful experience to paint him. I painted a gentle soul."

Bush took up painting -- starting with his pets, then going on to landscapes before advancing to portraits -- because "there's a Rembrandt trapped in this body (and) I'm a driven person. I want to get better."

"I wanted to make sure that the last chapters of my life were full," added the former president, who was inspired in part to take brush in hand by British wartime prime minister Winston Churchill, an avid amateur painter.

"And painting, it turns out, would help occupy not only space, but kind of open my mind."