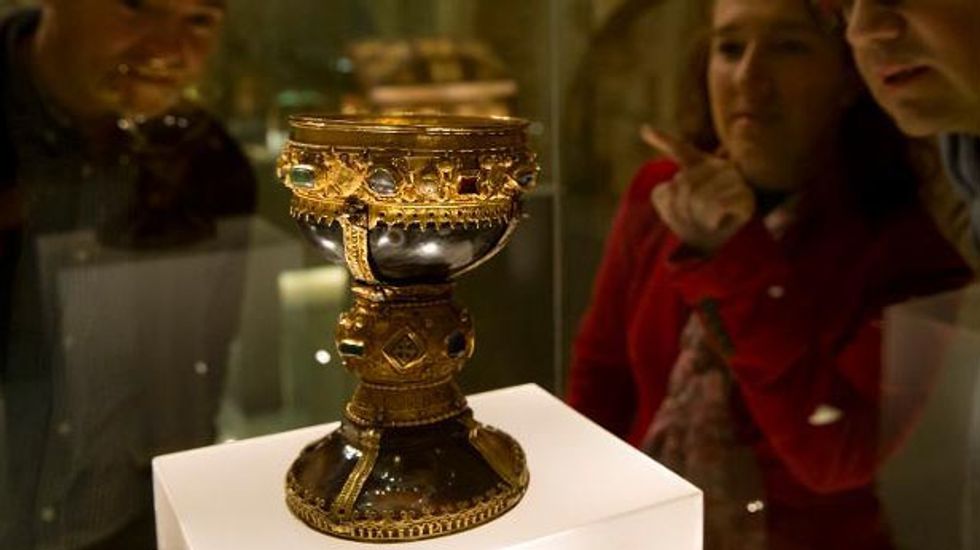 Claims that the Holy Grail has been found after sitting for 1,000 years in a Spanish church face a tough inquisition from doubtful historians.

Visitors flocked to the museum of the San Isidro basilica in Leon after a new book said it contained the chalice from which Jesus Christ sipped at the Last Supper.

Experts on Tuesday poured doubt on that dramatic claim by two Spanish historians, saying the Grail -- subject of tales from Medieval times to Indiana Jones and Monty Python -- was a myth, not a real drinking vessel.

"The Grail legend is a literary invention of the 12th century with no historical basis. You cannot search for something that does not exist," Carlos de Ayala, a medieval historian at the Madrid's UAM university, told AFP.

The cup joined a list of hundreds of pretenders to the title of Holy Grail, including one in the eastern Spanish city of Valencia.

Made of onyx and encased in gold and precious stones, the goblet in Leon has been known as the chalice of the Infanta Dona Urraca, daughter of Fernando I, king of Leon in the mid-11th century.

The historians Margarita Torres and Jose Manuel Ortega del Rio identified it as the prized Biblical relic in their book "Kings of the Grail", presented last week.

"All the scholars with whom I have discussed this announcement have evinced surprise at what we read in the news, which is why I will be interested to see what is actually written in the book," said Therese Martin, a US academic who has written a history of the San Isidoro complex.

"Medievalists tend to understand the legends of the Grail in a symbolic rather than a historical way."

Ortega and Torres said Egyptian parchments led them to identify the upper part of the chalice, which is formed from two goblets joined end to end, as the Grail.

"But even if the Infanta Urraca had believed that one of the ancient goblets that form the chalice was the Grail, it would be difficult to support such a theory nowadays."

The museum's director, Raquel Jaen, said the cup has been taken off display while curators prepare an exhibition space large enough to accommodate the crowds that flocked there after the authors unveiled their study.

"Some people who come are sceptical and others are curious to know more about how the research was carried out, while others come for religious reasons," she said.

Local clergyman Antonio Trobajo, a public relations official for the Diocese of Leon, said he hoped the cup would not be exploited for "the promotion of tourism purely for the sake of curiosity".

"It is irrelevant to faith whether it is authentic or not," he told AFP.

"To me as a believer it makes no difference at all whether the cup of Christ is here or in Valencia or elsewhere, because I will continue to believe, not in the object but in the person."

Torres said the Leon chalice was stolen from Jerusalem and taken to Cairo by the Fatimid Caliphate.

When a famine swept Egypt in 1054, an emir in Spain sent food to the Caliphate and asked for the chalice in return.

He then gave it as peace offering to Fernando, a powerful Christian Spanish king.

Torres and Ortega themselves admitted there are 200 supposed Grails in Europe alone, and attempted to debunk some of those contenders.

"None of the others relies on such a solid basis," Ortega del Rio said.

Jaen said the claims were "very important not only for our museum but for the city," despite the scepticism.

"The research was very much based on scientific methods. It is for others to evaluate its conclusions and tell us whether they are valid or not."