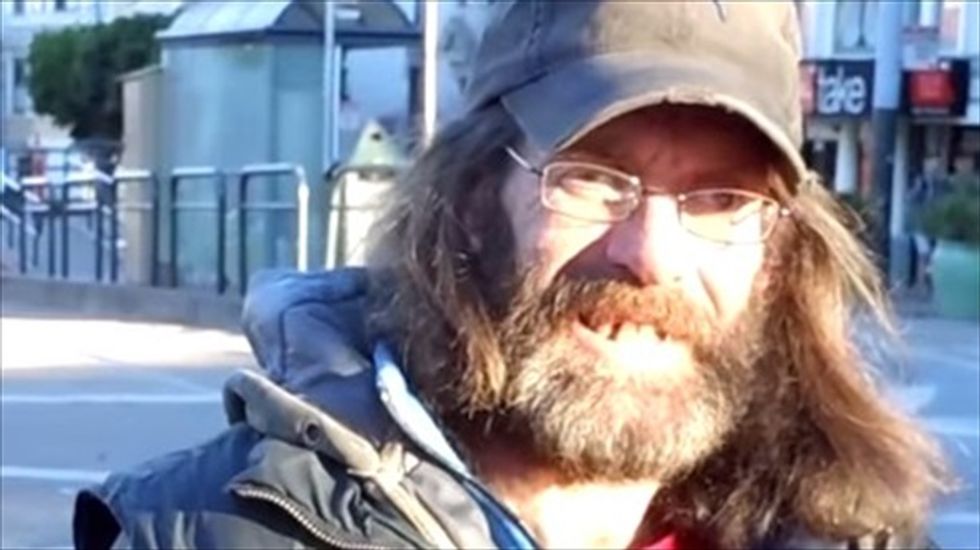 A self-described "entrepreneur and sociologist" has teamed up with a homeless man in San Francisco to use technology to combat what they describe as a tech-based lack of compassion.

"People are losing their social skills," Adam Reichart says in a video showing him attempting to get donations from passers-by on the streets. "And when they lose their social skills, I'm seeing that they're losing their compassion and their empathy, and the reality of everyday life. Most people in the United States, I think, are under the illusion that everything's fine."

Reichart, who has reportedly been homeless for the past 30 years, is listed as a "creative producer" on Homeless GoPro, which was developed by Kevin F. Adler. The video is shot from his point of view on a donated GoPro camera strapped to his chest.

Adler wrote on the project's website that he got the idea based on his experiences with his uncle, who was also homeless for three decades until his death at the age of 50. The project reportedly aims to provide more homeless residents with cameras and allow them, like Reichart, to demonstrate what the city's 6,500 or so people living on the streets face.

"The goal is to build empathy, enable the non-homeless to walk with a homeless person for a few moments, and to explore how a camera lens associated with 'hardcore' activities like snowboarding and surfing can showcase courage and difficulty of another sort," Adler wrote.

However, the project has already drawn criticism from tech website ValleyWag, which called it "stupidly uncreative, and yet somehow radically crass."

"What could possibly be more damning of the coding class than the idea that empathy requires a high-definition video stream? What kind of person can only feel for destitute strangers if they're provided a POV video stream of their lives?" Sam Biddle wrote. "That's what it'll take for you to realize you're driving a wealth-consolidation wedge into your city? If this is what it takes to spur action, then let's just f*cking give up on action."

Reichart, though, rejected the suggestion that he was being exploited in an interview with the San Francisco Chronicle.

"As for these guys, anything that helps people understand the homeless, maybe see us more as real people, is a good thing," Reichart was quoted as saying. "So I'm in."