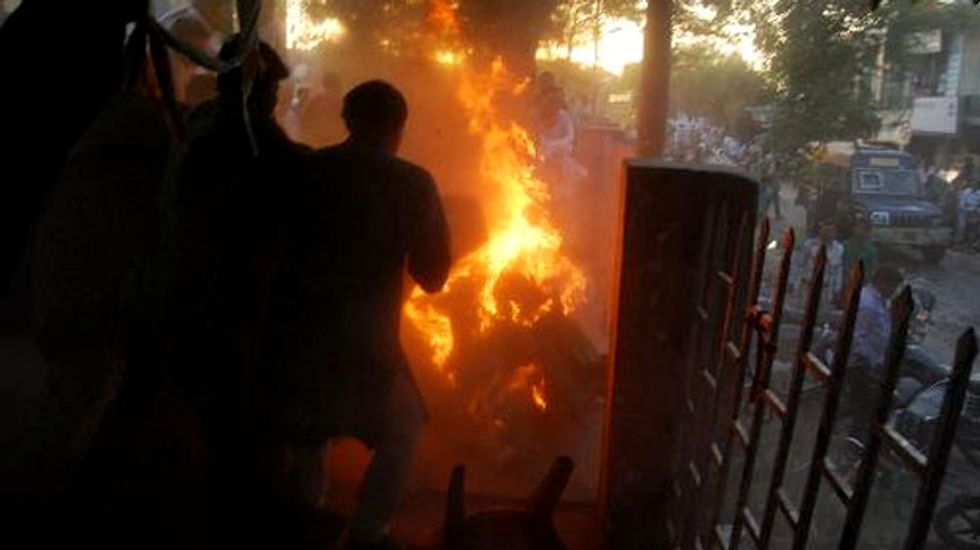 A television debate show in northern India ended in horror after a spectator set himself ablaze and embraced a local politician, leaving both men fighting for their lives, police said Tuesday.

The election show on India's state-owned national TV channel Doordarshan was being pre-recorded in a park on Monday in Sultanpur, a town about 160 kilometres (100 miles) from the city of Lucknow.

A man, named by police as Durgesh Kumar Singh, emerged from a crowd of about 150 onlookers, doused himself in petrol and then grabbed the local leader of the Bahujan Samaj Party, Kamruzzama Fauji.

Singh sustained burns on 95 percent of his body which doctors say are likely to be fatal, while Fauji was in critical condition with 75 percent burns, police said.

"This man suddenly came on the stage, poured petrol on himself and set himself on fire before tightly hugging one of the political guests," local photographer Pankaj Kumar Gupta told AFP.

"People were just too shocked to know what was happening," said Gupta, whose photos show the men engulfed in flames with spectators fleeing the scene.

Two other local politicians taking part in the show, Ram Kumar Singh and Chowdhary Hriday Ram Verma, sustained minor burns while trying to save the pair.

"The injured were first admitted to the district hospital here (in Sultanpur) and were then referred to Lucknow," a police statement said.

The motive for the incident was unknown.

"This is a sad and shocking event during our roadshow debate whose programme format is similar to other news channels during this election season," Moghe said.

"The reason why the man set himself on fire is being investigated by the authorities," he added.

India's numerous television channels are holding nightly debate shows during the parliamentary elections. The shows are often staged in villages and towns with politicians taking questions in front of local voters.

The election, the world's biggest democratic vote, runs until May 12, with results expected on May 16. The Hindu nationalist opposition Bharatiya Janata Party (BJP) expected to come to power after 10 years of rule by the leftist Congress party.

Photographer Gupta said the show on Monday was called Janmanch 2014 (People's Forum 2014) and featured five local politicians. It was coming to an end when the man suddenly appeared.

"Within minutes, the Doordarshan team closed its cameras and packed all their equipment" and fled the scene, Gupta said.