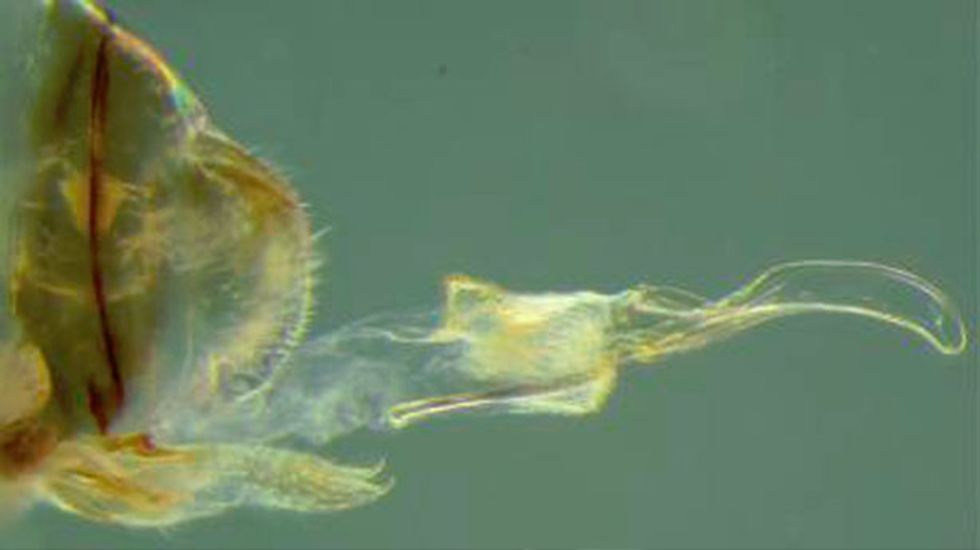 Scientists on Thursday described four insect species that dwell in extremely dry caves in Brazil, feed on bat guano and possess what the researchers called an "evolutionary novelty." .

The females have an elaborate, penis-like organ while the males have a vagina-like opening into which females insert their organ during mating sessions that last 40 to 70 hours, the scientists reported in the journal Current Biology.

The researchers said these attributes make the four species of the insect genus Neotrogla unique in the world.

"Evolution of novelties like a female penis is exceptionally rare. That's why I was really surprised to see the structure," entomologist Kazunori Yoshizawa of Japan's Hokkaido University said by email.

Yoshizawa said that although sex-role reversal has been documented in several different types of animals, these insects are the sole example in which the "intromittent organ" - the male sex organ - is reversed, Yoshizawa said.

The Neotrogla insects are small - one tenth to one and a half tenths of an inch long (2.7 mm-3.7 mm) - and superficially look like flies, with nothing particularly unusual about their appearance aside from their genital structures.

The scientists call the female penis-like structure a gynosome. During mating, a female inserts it into a male and receives sperm. Once inserted, part of the gynosome inflates and spines internally anchor the male and female insects together.

"Because the female anchoring force is very strong, a male's strong resistance may cause damage to his genitalia. Therefore, it is very likely that entire mating processes are controlled actively by females, whereas males are rather passive," Yoshizawa said.

A Brazilian researcher who was studying cave ecosystems first came across the insects, then enlisted an insect expert to examine the previously unknown bugs. It was at that point that the unique attributes of the female Neotrogla were discovered, leading to the current study.

Yoshizawa cited other unusual examples of sex organs among animals, including female seahorses that use an organ to deposit eggs within a male's brood pouch and a kind of mite whose females have a long genital tube.

By the definition of female - an organism that produces egg cells that are larger than the sperm cells produced by males - "even with the penis-like intromittent organ, females of Neotrogla are still female," Yoshizawa said.

But Yoshizawa added: "Females of Neotrogla likely represent the most 'macho' females among animals discovered to date."

(Reporting by Will Dunham; editing by Andrew Hay)