'It's a first step': Activists in Lebanon mark passage of law against domestic violence 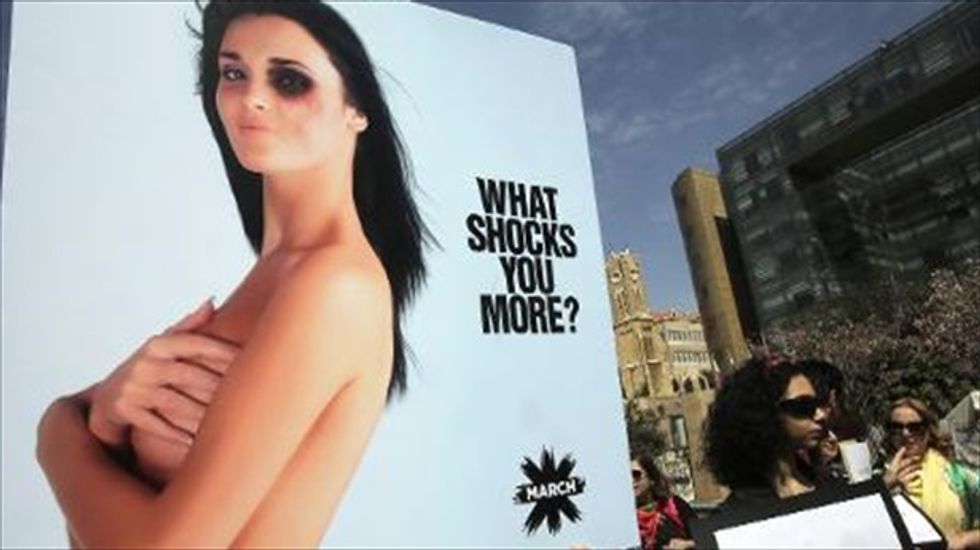 A woman holds up a placard as she takes part in a rally to urge the Lebanese parliament to sign a law against domestic violence, on April 1, 2014, in Beirut [AFP]

Lebanon's parliament on Tuesday passed a law making domestic violence a criminal offence, after a years-long campaign by civil society groups in a sectarian Arab country steeped in conservativism.

Large sectors of Lebanese society have traditionally regarded beatings of women and children as religiously and socially acceptable.

New York-based Human Rights Watch described the bill as "historic," but pointed to gaps which did not ensure full protection for women.

For its part, leading Lebanese women's rights organisation Kafa was critical of the law in its current form.

It fails to specifically enshrine protection for women, said Kafa, adding that the law used religious terminology in place of rights-based terms.

Ghassan Mkhayber, an MP who played a key role in lobbying for the law, told AFP: "It is a big step forward in protecting women, we should be proud.

"We now have a law that provides effective protection for women ...

"It's not the ideal text, but it's a first step," Mkhayber said, while stressing that the law must now be enforced.

The law passed after a Kafa-led campaign which saw thousands of demonstrators take to the streets of Beirut on March 8, International Women's Day.

It came after several women died allegedly from beatings by their husbands.

For Kafa's Faten Abu Shakra, who led the campaign, the law "does not specifically focus on women."

She opposed the introduction "by religious men of religious language" into the bill, which fails to specifically refer to marital rape as a crime.

It criminalises causing "harm", including "beatings" and "threats", to obtain seAx, but the term "conjugal right" is used without mention of consent.

MP Mkhayber said the term aimed to appease Lebanon's powerful clerics, who had been opposed to the bill outright.

According to Rothna Begum of Human Rights Watch, the law is "a positive step forward in ensuring protection for women from domestic violence."

She told AFP: "It includes positive steps such as providing for restraining orders against abusers; temporary accommodation for the survivors of abuse."

The law also "assigns a public prosecutor in each of Lebanon's six governorates to receive complaints and investigate cases of violence; and establishes specialised family violence units within Lebanon's domestic police to process complaints."

But "parliament should seek to urgently reform this new law if it is to ensure women full protection from domestic violence including criminalising marital rape."