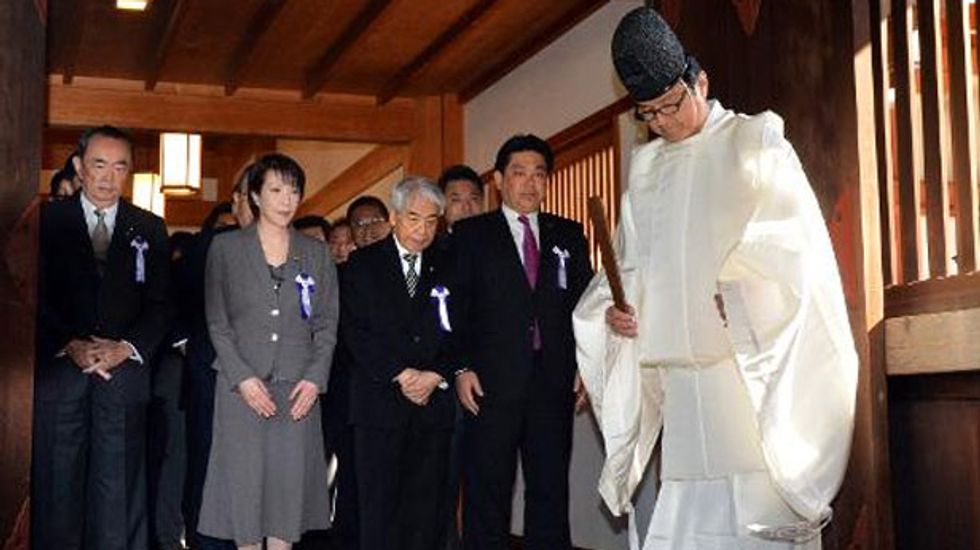 Nearly 150 Japanese lawmakers on Tuesday paid homage at the Yasukuni shrine which honours the nation's war dead, raising the stakes in an already tense region on the eve of US President Barack Obama's visit.

A cross-section of parliamentarians -- including at least one cabinet minister -- paid their respects at the shrine, which honours those who have fought for Japan including a number of senior military and political figures convicted of war crimes.

China and South Korea see the shrine as a symbol of what they say is Japan's unwillingness to repent for its aggressive warring last century. The United States tries to discourage visits, which it views as unnecessary provocation.

The South Korean Foreign Ministry said it "deplored" the mass visit as the shrine is a "place that enshrined war crimes that caused a war and destroyed peace."

"I think it is such an empty gesture to talk about the future with neighbouring countries while paying respects to such a place," ministry spokesman Cho Tai-Young said.

Japan's conservative Prime Minister Shinzo Abe stayed away from Yasukuni, having offered a symbolic gift on Monday at the start of the three-day spring festival.

However, the right-leaning minister for internal affairs and communications, Yoshitaka Shindo, was among the worshippers early Tuesday, paying his second visit in 10 days.

"I renew my faith in peace so that such tragedies will never be repeated. This is the belief that I always keep in mind when I come to Yasukuni Shrine," he said, adding that he was there in a private capacity.

The mass visit will inevitably further aggravate strained ties in East Asia, and could irritate the White House, coming the day before Obama arrives on the first leg of a four-nation trip which also includes South Korea.

Washington would desperately like Japan and South Korea -- its two chief allies in the region -- to bury the diplomatic hatchet and stand together against Beijing's increasingly confident regional swagger and against unpredictable Pyongyang.

Abe's own visit to the shrine on December 26 soon after a trip to Tokyo by US Vice President Joe Biden immediately sparked fury in Asia and earned him a slap on the wrist from Washington, which said it was "disappointed".

The Japanese premier's gift on Monday provoked a Chinese charge that he was offering "a slap in the face" to Obama.

Conservative lawmakers make regular trips to the shrine during spring and autumn festivals, and on the August 15 anniversary of Japan's World War II defeat.

They compare the site with Arlington National Cemetery in the US, where America's war dead are honoured.

"Speaking personally, my father is enshrined here," said Hidehisa Otsuji, an upper-house lawmaker who was at Yasukuni.

"The souls revered here are the people who lost their lives purely for the sake of the country."

About 160 lawmakers visited the shrine during the spring and autumn festivals last year.

Sanae Takaichi, the policy chief of Abe's Liberal Democratic Party, who went to the shrine as a member of the group, said politicians' display of reverence should not provoke diplomatic difficulties.

"It happens to be the time for the spring festival," she told reporters. "We welcome the US president's visit to Japan from the heart."

Others paying their respects at the shrine were some vice ministers and a special adviser for Abe, Seiichi Eto.

"We pray for peace, which is not anything (other countries) should make comments on," he told reporters.

Chief Cabinet Secretary and Abe's righthand man Yoshihide Suga said the administration would not interfere with shrine visits by members of the government.

"When a minister visits the shrine personally, it is a matter of an individual's freedom of faith. The government should not step into it," he said.