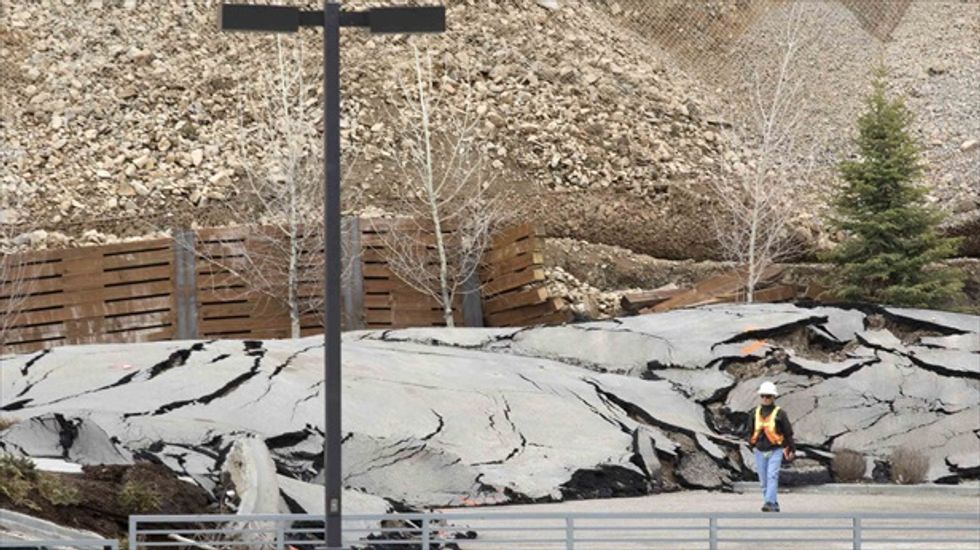 (Reuters) - A Wyoming landslide menacing houses and businesses in an upscale resort town has slowed to a crawl, giving crews time to prevent the rupture of a water main, although one official cautioned on Thursday that the respite could prove temporary.

The slow collapse of the East Gros Ventre Butte in Jackson, a popular international ski destination and gateway to the Grand Teton and Yellowstone national parks, has torn a house in two, buckled roads, displaced dozens of residents from their homes and shuttered several businesses.

The landslide first prompted evacuations earlier this month and concerns mounted as it began picking up speed. Thursday marked the first time the slow-moving slide has shown signs of stabilizing in three weeks.

George Machan of Landslide Technology, a geotechnical firm that provides landslide evaluation and mitigation services, said the slide had "a significant slowing" amid efforts to reinforce the bottom of the butte with six million pounds of concrete and other materials. But he cautioned that it could be short-lived.

The risk is low for a catastrophic collapse of the hillside, but current stabilization efforts are aimed at the short term and will not constitute a lasting solution, Machan said at a town meeting.

Jackson Police Lieutenant Cole Nethercott said it was possible some residents might be able to use a temporary road as early as next week to gain access to their houses.

"But things can change in a moment," he said.

Utility crews re-routed a section of a city water main threatened by the slide that could have released two million gallons of water in minutes, said Nethercott.

Landslides are common in a region framed by the towering peaks of the Teton Range but rarely threaten people or property.

The creep in Jackson may be tied to historic excavation of the hill, land development and moisture from rain or snow melt seeping into rock formations and weakening them, geologists said.

Mountainside drilling experts are boring test holes in the East Gros Ventre Butte to determine its rock and soil characteristics, water content and to gain a more precise measure of ground movement at different depths.

Landslides kill 25 to 50 people and account for $2 billion to $4 billion in losses in the United States in an average year, according to the U.S. Geological Survey. A massive landslide in Washington state last month killed at least 41 people.