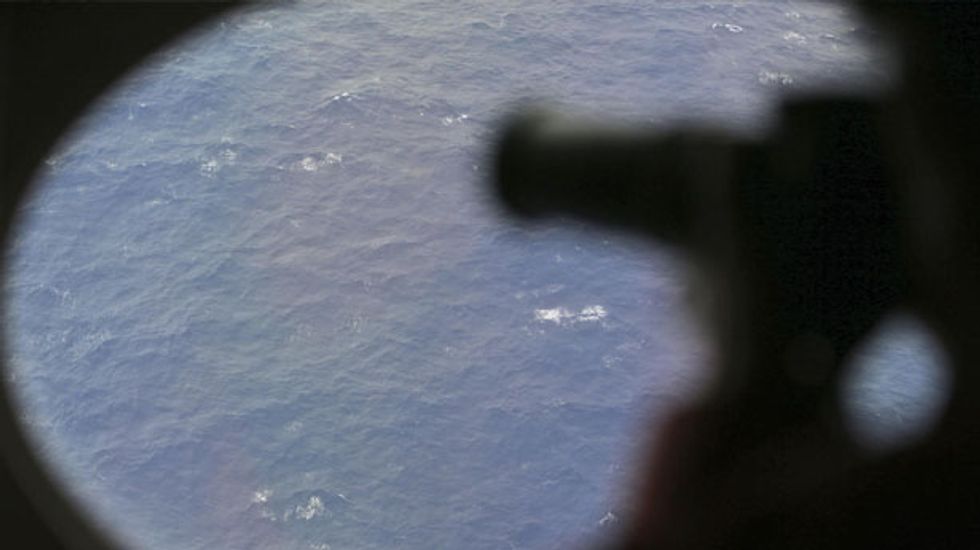 Malaysian Prime Minister Najib Razak vowed Thursday "we will not rest" until the fate of flight MH370 is known, as Australia called it "the most difficult search in human history".

Najib toured the military base in Perth being used as a staging post in the hunt for the Malaysia Airlines plane carrying 239 people that is believed to have crashed in the Indian Ocean.

"We want to find answers. We want to provide comfort to the families and we will not rest until answers are indeed found," Najib said, as he thanked those involved in the eight-nation search.

Despite extensive scouring of the remote southern Indian Ocean, no debris that would indicate a crash site has been found, with time running out to locate the plane's "black box" which only emits a signal for around 30 days.

Najib admitted the exhaustive hunt for the Boeing 777 that vanished on March 8 was a "gargantuan task", but said he was confident that "in due time we will provide a closure to this event, on this tragedy".

Kuala Lumpur's response has been widely criticised, especially by distraught relatives of the 153 Chinese nationals aboard.

Najib left without taking questions, as a reporter called out a query about Malaysia's handling of the crisis.

Adding to the frustration for families affected, Malaysian police chief Khalid Abu Bakar said Wednesday a criminal investigation into what caused the flight to veer from its intended route between Kuala Lumpur and Beijing had so far been inconclusive.

In contrast, Australia's mobilisation since it was handed increased responsibility in the search effort has been praised.

Australia has far more experience than Malaysia of rescue operations, routinely monitoring huge tracts of ocean, but Prime Minister Tony Abbott said the current search was the toughest ever.

"Every day, working on the basis of just small pieces of information, we are putting the jigsaw together. And every day we have a higher degree of confidence that we know more about what happened to this ill-fated flight," he said.

"It is a very difficult search, the most difficult in human history, but as far as Australia is concerned we are throwing everything we have at it."

Eight nations, many of whom do not normally work together, have rallied to look for clues in the Indian Ocean to one of the greatest aviation mysteries the world has seen.

"It shows what we can do, and if anyone would ever be unhappy or distraught about the prospects for international peace and harmony, this operation is a marvellous antidote to pessimism," said Abbott.

A British nuclear submarine with underwater search capabilities on Wednesday joined planes and ships scouring the vast oceanic search zone, but again nothing was reported found.

Australia's Joint Agency Coordination Centre, which is directing the search, said eight planes and nine ships were involved Thursday as they further refined the search area, moving it to west north-west of Perth.

Australia's Ocean Shield naval vessel, which is fitted with a US-supplied "black box" detector, is due to arrive in the area Friday. But without a confirmed crash site, hopes of finding the device are slim.

Malaysian police chief Khalid on Wednesday said all 227 passengers had been "cleared" of suspicion, as authorities probe a possible hijack or sabotage plot.

Police are still investigating the backgrounds of the plane's 12 crew, as well as ground staff and flight engineers.

Authorities still have no idea how or why the plane vanished, and warn that unless the black box is found, the mystery may never be solved.

The battery-powered signal from the black box -- which records flight data and cockpit voice communications -- is expected to expire within days.

On Wednesday, Malaysian officials sought to explain to sceptical relatives their conclusion -- based on complex satellite data -- that the plane went down in the Indian Ocean.

That determination has outraged some families who say wreckage must first be recovered.

"I know that until we find the plane, many families cannot start to grieve," Najib said.

"I cannot imagine what they must be going through. But I can promise them that we will not give up."

Ties between Beijing and Kuala Lumpur suffered a further blow Thursday after a Chinese tourist was kidnapped from a Malaysian diving resort by gunmen.

China's foreign ministry pressed Malaysia to make an "all-out effort" to rescue the woman -- a Filipina resort worker also was abducted -- and to take steps to ensure the safety of Chinese tourists.