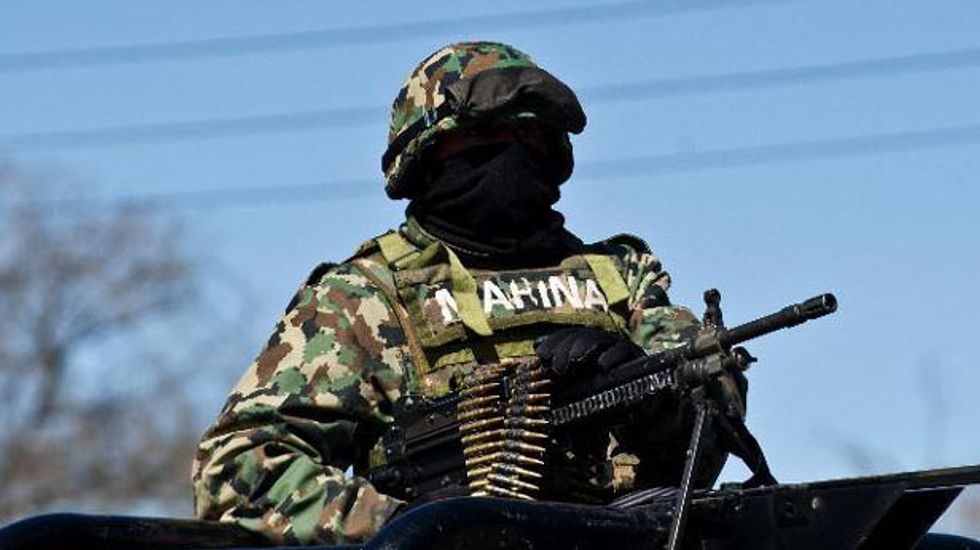 Mexican marines killed a leader of the Knights Templar drug cartel on Monday, three weeks after the cult-like gang's top chief was gunned down, officials said.

Enrique "Kike" Plancarte was killed in the state of Queretaro in central Mexico, two government officials said on condition of anonymity.

"It was in a navy operation," one of the officials told AFP, declining to give more details because the interior ministry will make an official announcement on Tuesday.

Plancarte, 43, was considered one of the top four leaders of the Knights Templar gang, which is based in the western state of Michoacan and has been under pressure from government and vigilante forces for several months.

Mexican media reported that Plancarte was killed by marines after resisting arrest near a football field in the town of Colon following an operation that involved around 150-200 troops.

The interior ministry said on Twitter that authorities were verifying Plancarte's identity and that more information would be given on Tuesday.

His death comes after Knights Templar founder Nazario Moreno, alias "El Chayo," was killed by troops in Michoacan on March 9.

Moreno had been mistakenly reported killed in December 2010, leaving fellow leader Servando "La Tuta" Gomez as the public face of the cartel.

Plancarte's uncle Dionicio, who was also a key leader of the gang, was detained in January.

Vigilante militias that formed a year ago to kick the cartel out of Michoacan towns had named Plancarte as one of the top Knights Templar leaders that they wanted to see taken down.

Mexican authorities had offered a $750,000 reward for information leading to his capture, with prosecutors accusing him of being one of the main traffickers of drugs to the United States. He was also on a US Treasury list of drug lords under sanctions.

The Knights Templar are considered major smugglers of crystal meth to the United States, but their business has expanded to include illegal mining of iron ore for export to China.

The gang held sway across Michoacan's agricultural Tierra Caliente (Hot Country) region, but farmers began to take up arms in February 2013, fed up with the police's inability or unwillingness to curb the cartel.

The vigilantes kicked the cartel out of some 20 towns and allied themselves with federal forces in January, but the so-called "self-defense" militias have faced trouble with the law.

Earlier Monday, authorities accused a vigilante leader of ordering the murder of a mayor who opposed the self-defense forces.

Enrique Hernandez Salcedo was among 19 people detained in connection with the murder of Tanhuato Mayor Gustavo Garibay Garcia.

It was the second arrest of a vigilante leader in recent weeks.

Earlier in March, authorities arrested one of the most high-profile self-defense leaders, Hipolito Mora, on charges of being behind the March 8 double murder of two fellow vigilantes.

Mora, a lime grower from the town of La Ruana, has declared his innocence.