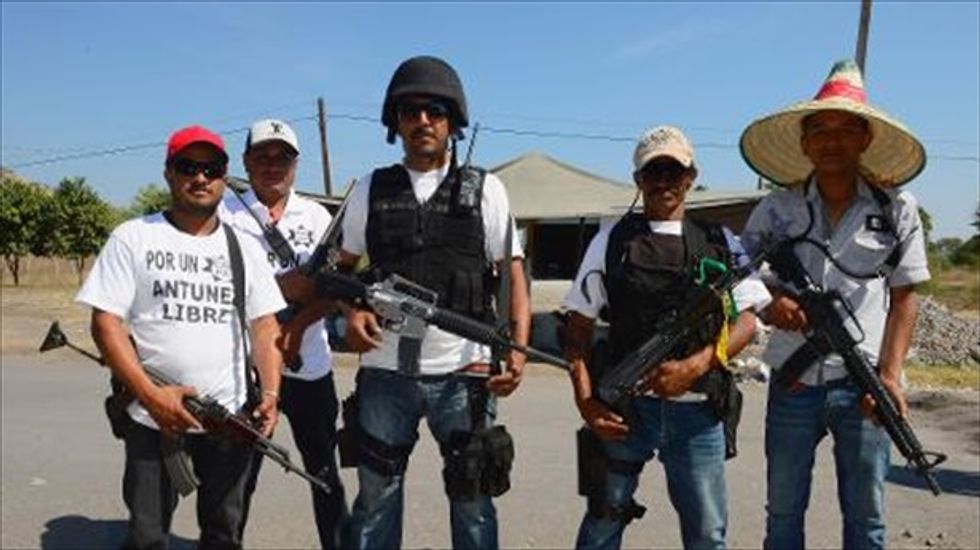 Members of the so-called self-defense groups pose for a picture at Antunez community, Michoacan state, Mexico, on Feb. 15, 2014 [AFP]

Mexican authorities have detained more than 110 people posing as vigilantes battling a drug cartel in the western state of Michoacan in the last two weeks, an official said Tuesday.

At least 46 suspected members of criminal groups were arrested in recent days in the town of Huetamo, where they acted as members of "self-defense" militias that spread in Michoacan in the past year, said senior federal official Alfredo Castillo.

"The suspected criminals clearly covered their activities by posing as members of the self-defense groups in that town, wearing white shirts with the words 'Free Huetamo' and 'Self-Defense Group,'" he said in a statement.

More than 110 people masquerading as vigilantes have now been detained in the state in the last two weeks, Castillo told Radio Formula.

The federal government has given Michoacan's vigilante forces until May 10 to disarm or join a rural defense corps overseen by the army. Castillo said anybody caught with an illegal weapon after that will be arrested.

Civilians formed the militias in February 2013 to combat the Knights Templar drug cartel, accusing local police of being unwilling or unable to stop the gang's extortion rackets and kidnappings.

In response to the security crisis in the state, President Enrique Pena Nieto deployed 10,000 federal police and troops in May 2013.