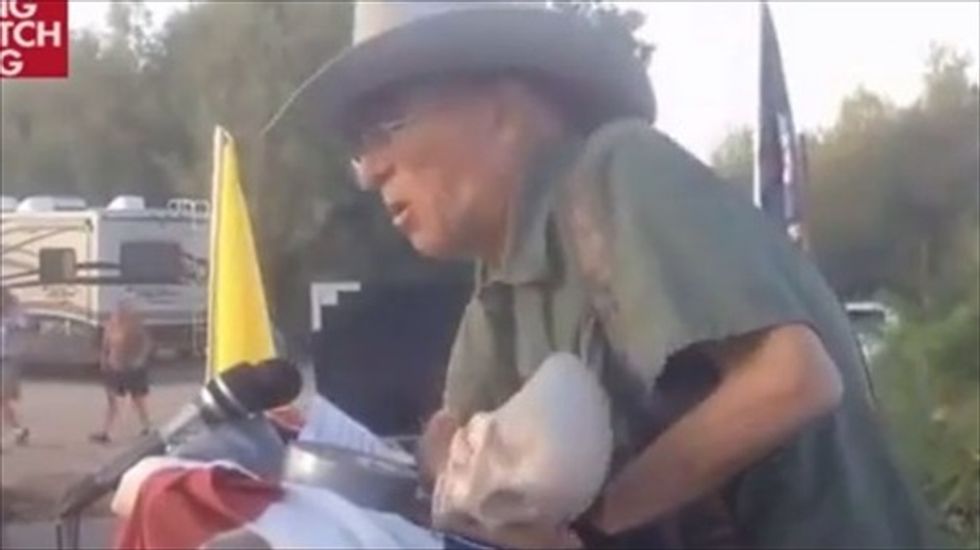 "Don't poke the wolverine with a sharp stick, Harry," Three Percenters founder Mike Vanderboegh said the message would read. "Unless you want your b*lls ripped off."

Vanderboegh referred to the skull as a "soap dish" he would send to Reid signifying the "2014 award for incitement to civil war." The speech reportedly took place last week, following the standoff between Bundy supporters and officials with the Bureau of Land Management (BLM), who subsequently cut short a plan to round up Bundy's cattle for refusing to pay federal grazing fees for the past 20 years.

Reid has called Bundy supporters "domestic terrorists," citing the presence of armed militia members -- some of whom took up sniper positions during the encounter with the BLM. More recently, residents near Bunkerville, Nevada have reportedly accused militia members of setting up "checkpoints" and making their way into local schools and churches. Vanderboegh told the crowd last week that he did agree with Reid in saying the dispute is not over.

"He is promising us all civil war on a vast scale," Vanderboegh said of Reid. "Because state-sponsored violence is the only way they can win an argument with free people, especially free people who are armed and who are willing to use those arms in defense of liberty."

According to RWW, the "Three Percenters" take their name from the percentage of U.S. colonists they believe opposed the British in the Revolutionary War.

Another militia group, the "Oath Keepers" thanked Vanderboegh's group for supporting their pro-Bundy stance. The Daily Kos has reported that a schism has developed between the Oath Keepers and individuals saying they are in charge of security for Bundy's ranch.

Watch video of Vanderboegh's remarks, as posted online on Wednesday, below.

Trump and his allies, wrote Painter, need to face accountability for a broad range of allegations, including trying to sabotage the USPS to undermine the election and trying to weaponize the Justice Department to stage a coup. And there is already a roadmap to doing so, wrote Painter — laid out by none other than current President Joe Biden when he was a U.S. senator 30 years ago.