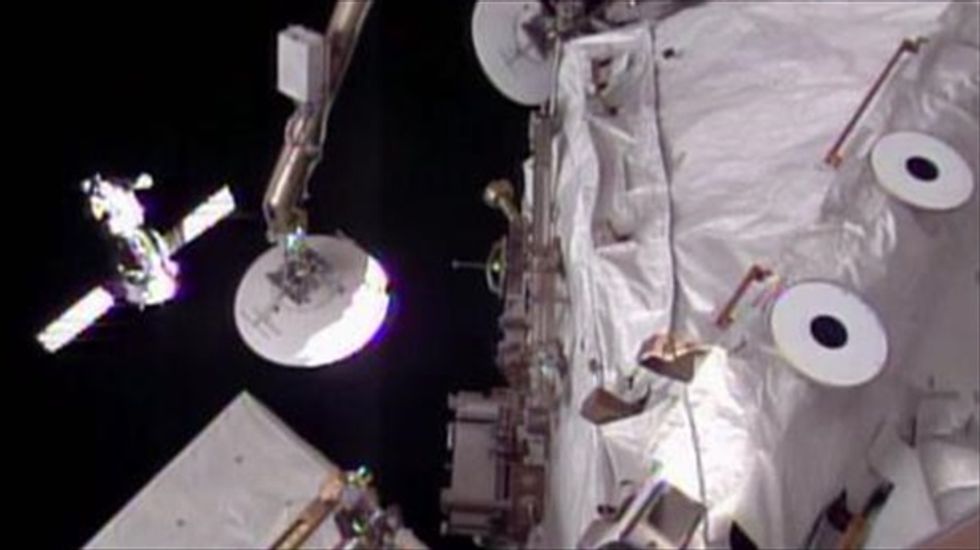 Still image from video shows the Soyuz TMA-12M spacecraft meters away from docking at the International Space Station on March 27, 2014 [AFP]

NASA has cut all contacts with Russia except for cooperation aboard the International Space Station, according to an internal memo obtained by the online news site The Verge on Wednesday.

However, a copy of the memo posted online described a halt to travel to Russia by NASA employees and to visits by Russians to NASA facilities, and a freeze on exchange of email, teleconferences and video conferences.

"Given Russia's ongoing violation of Ukraine¹s sovereignty and territorial integrity, until further notice, the US government has determined that all NASA contacts with Russian government representatives are suspended, unless the activity has been specifically excepted," it said.

The new policy does not apply to "operational International Space Station activities" or "multilateral meetings held outside of Russia that may include Russian participation," added the memo.

Russia's Soyuz spacecraft are the sole means of transport to the ISS for the world's astronauts. The United States pays Russia an average of $70.7 million per seat.

The direction applied to "all NASA centers" and was ordered by Michael O'Brien, NASA's associate administrator for International and Interagency Relations.

NASA Administrator Charles Bolden told lawmakers on March 27 that he was aware of no threat that would jeopardize the Russian-US partnership at the space station.

Earlier Wednesday, NATO warned that Russia's military presence on the flashpoint border -- estimated at about 40,000 troops -- with Ukraine was of "grave concern."

NATO on Tuesday announced the alliance was suspending all practical cooperation with Russia, military and civilian, and that there was no confirmation that Russian troops were pulling back from the border.