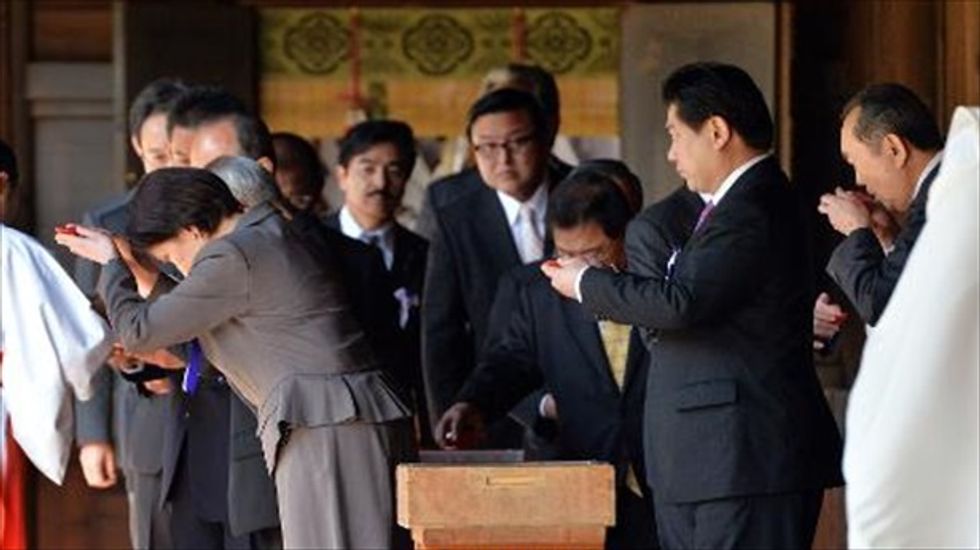 Japanese lawmakers drink sake for purification after they offered prayers for the country's war dead at the controversial Yasukuni shrine during the Spring festival in Tokyo on April 22, 2014 [AFP]

A group of nearly 150 Japanese lawmakers visited the controversial Yasukuni war shrine on Tuesday, a move that could further worsen ties with Asian neighbours, on the eve of US President Barack Obama's arrival.

A total of 146 lawmakers from both houses of parliament made the trip en masse to the shrine to mark a three-day spring festival currently under way, according to one lawmaker who was acting as a spokesman for the group.

That, and the accompanying museum -- which paints Japan as a frustrated liberator of Asia and victim of World War II -- makes it controversial, especially in China and South Korea, where it is seen as a symbol of Japan's lack of penitence.

Prime Minister Shinzo Abe has not made a pilgrimage during the festival, but donated a tree to the shrine on Monday, sparking a Chinese charge that he was offering "a slap in the face" to Obama, who is flying into Japan on Wednesday for a state visit.

Washington is calling for Asian neighbours to mend ties.

The sending of a gift to Yasukuni has been seen as a sign that Abe does not intend to visit, as he did on December 26, sparking fury in Asia and earning him a diplomatic slap on the wrist from the United States, which said it was "disappointed".

Conservative lawmakers make regular trips to the shrine during spring and autumn festivals, and on the anniversary of Japan's defeat in World War II.

About 160 lawmakers visited the shrine during the spring and autumn festivals last year.

Yoshitaka Shindo, minister for internal affairs and communications, paid individual homage at Yasukuni early in the morning on Tuesday, his second visit in 10 days.

He told reporters he went as a private citizen, playing down the potential for diplomatic fallout.