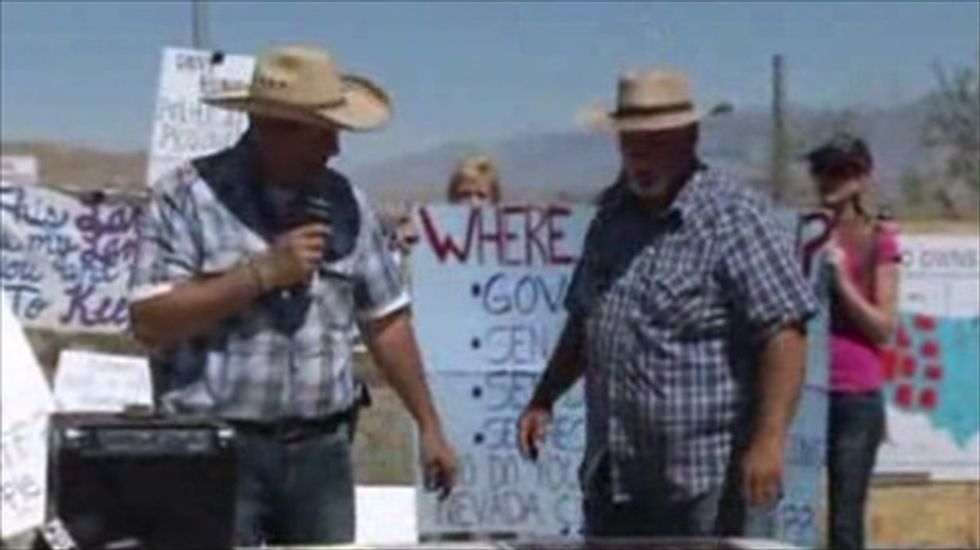 A roadside protest supporting the Nevada rancher who threatened the government with a "range war" over using public land for grazing his livestockhas drawn more people, with cellphone video capturing clashes between protesters and federal offiicials, KTNV-TV reported on Thursday.

"This will be the end of ranching in Clark County if they get away with what they are attempting," one demonstrator, Richard Jensen, was quoted as saying.

Members of rancher Cliven Bundy's family addressed the crowd outside Bunkerville, Nevada on Thursday, a day after video was posted online of an officer with the Bureau of Land Management (BLM) apparently pulling one demonstrator to the ground as vehicles drove away from the area. The video also showed BLM personnel pulling Tasers out.

"Our federal agents -- who I've not had the opportunity to speak with yet -- have been quite aggressive from the video footage that I've seen, and I don't think that that is OK," state Assembly member Michelle Fiore (R) said after visiting the protest site on Wednesday. "As an elected official for the state of Nevada, protecting Nevadans is Number one."

The bureau released a statement on Wednesday saying some protesters were blocking vehicles used to impound Bundy's cattle, as well as threatening officials.

"A BLM truck driven by a non-law enforcement civilian employee assisting with gather operations was struck by a protester on an ATV and the truck' exit from the area was blocked by a group of individuals who gathered around the vehicle," the statement read in part. "A police dog was also kicked. Law enforcement officers attempting to protect the civilian federal employee from the attack were also threatened and assaulted. After multiple requests and ample verbal warnings, law enforcement officers deployed Tasers on a protester."

The bureau has been rounding up Bundy's cattle after he incurred more than $1 million in fines over a 20-year period for refusing to pay a grazing fee instituted to protect desert tortoises living in the area, known as the Gold Butte.

Bundy and his family argue that they have the right to use the land for free since they have historical roots in the area. His son, Ammon Bundy, also accused BLM officials of Tasing him twice in the neck and midsection.

"We are being occupied here on this land," Ammon Bundy said to the crowd on Thursday. "And it's not just by nice rangers that like to smile."

Watch KTNV's report, as aired on Thursday, below.