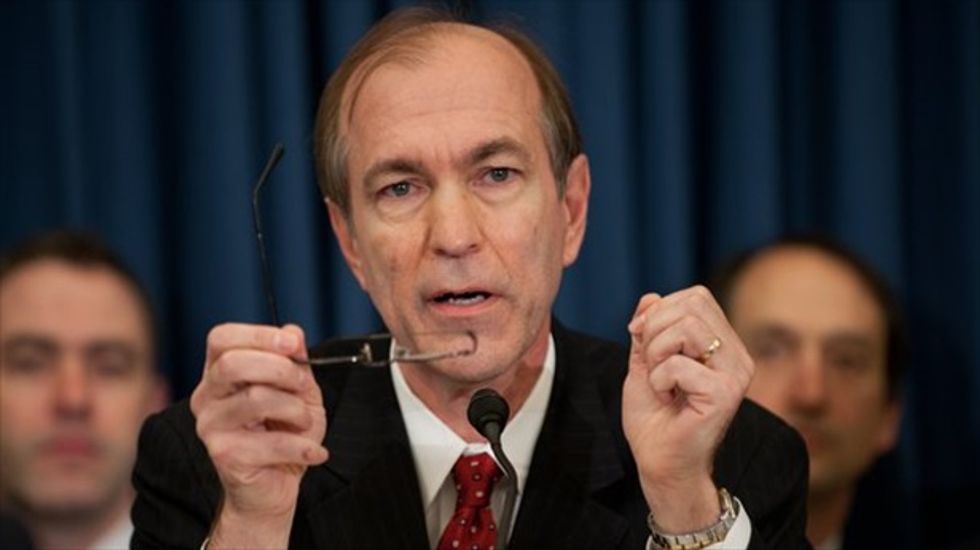 WASHINGTON (Reuters) - A Republican member of Congress said on Thursday he was denied access to a closed-door meeting of a new U.S. regulatory body that polices market risks, and introduced legislation that he contends will make the group more transparent.

"It has become increasingly apparent that the Financial Stability Oversight Council ... is in serious need of reform," said Garrett, a high-ranking member of the House Financial Services Committee.

"The council meets in secret, refuses to disclose substantive transcripts, and blocks any requests by other regulators or members of Congress for a more open and transparent process," he said.

The FSOC was created by the 2010 Dodd-Frank reform law to keep an eye on emerging systemic risks following the U.S. financial crisis of 2007-09.

It comprises the heads of all the top regulatory agencies including the chair of the Federal Reserve, and is chaired by Treasury Secretary Jack Lew.

The group can impose additional regulations on large financial firms that could destabilize the economy if they failed.

Three of the Securities and Exchange Commission's five commissioners have complained publicly that they are unable to participate in FSOC's deliberations, even as the FSOC has continued to push for more regulations on asset management firms that are overseen by the SEC.

As chair of the SEC, Mary Jo White serves as the member who represents the interests of the SEC on the council.

Each member, including White, regularly attends closed-door sessions to discuss regulatory matters. Staffers from all of the FSOC-member regulatory agencies who are tapped as "deputies" of the council also meet separately.

But the law does not consider the other four SEC commissioners to be FSOC members, so they do not participate in FSOC's decision-making.

Garrett said Thursday that the he recently sought permission from the U.S. Treasury to attend a March 27 FSOC meeting, but was denied.

He said his bill contains a number of measures to make the council more transparent. It would, for instance, permit certain members of Congress to attend FSOC meetings, and allow other regulators who are not technically FSOC members to participate.

A Treasury spokesperson did not have an immediate comment on the bill, but pointed to a two-page transparency policy statement issued by the council.

That policy statement says the FSOC will open their meetings to the public whenever possible, but that the council needs to exercise caution because many discussions involve "supervisory and other market-sensitive data" that must be protected.

As for who can attend meetings, a Treasury spokesperson told Reuters on Wednesday that the council usually defers to the member agencies to determine who attends top-level meetings.

"For deputies' meetings, we try to keep it to two attendees per agency to allow for a more productive conversation," the spokesperson said in an email.

Other FSOC member agencies, including the Commodity Futures Trading Commission, also have multiple commissioners who do not attend the council's meetings.

Garrett's bill could potentially make it to the floor of the U.S. House of Representatives, which is controlled by Republicans, for a vote.

But while the Democratically-controlled Senate is not likely to take up such a bill, the proposal is seen as likely to stir up the debate over FSOC's structure and governance.