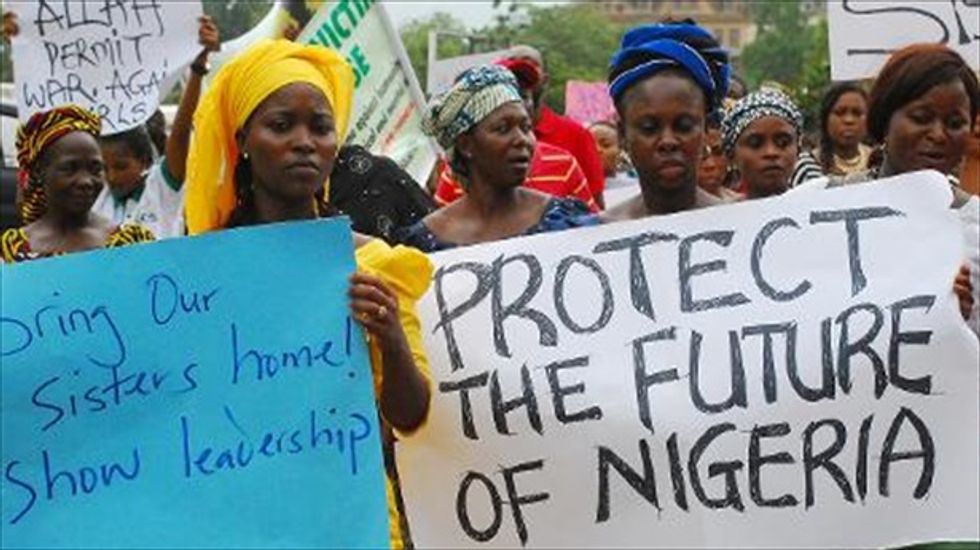 Women hold banners during a march by Nigerian women and mothers of the kidnapped girls of Chibok calling for their freedom in Abuja on April 30, 2014 [AFP]

Nigerian protesters marched on parliament Wednesday to demand the government and military do more to rescue scores of schoolgirls kidnapped by Boko Haram Islamists more than two weeks ago.

Dubbed "a million woman march" and promoted on Twitter under #BringBackOurGirls, the protest was not expected to draw a massive crowd and turn-out was hindered by heavy rain in the capital Abuja.

But several hundred women and men, mostly dressed in red, marched through the rain towards the National Assembly carrying placards that read "Find Our Daughters."

Protest organiser Hadiza Bala Usman told AFP that "the protest will be sustained until the girls are released by their captors. We hope to continue the protest on Thursday in Abuja, and on Monday in Lagos."

"We will also demand to see the president if we don't get any commitment from government to rescue these girls," she added.

The abduction of the girls on April 14 at gunpoint from their school in the northeast has outraged Africa's most populous nation.

"The government has to understand that we are not going to allow this silence to continue," Usman earlier told AFP.

In the northern city of Kano, roughly 100 people dressed in black marched towards the state governor's office, calling for the girls' immediate release.

The mass kidnapping in the Chibok area of northeastern Borno state was one of the most shocking attacks in Boko Haram's five-year extremist uprising, which has killed thousands across the north and centre of the country.

Borno's government said 129 girls were taken and that 52 have since escaped.

Locals, including the principal at the targeted Government Girls Secondary School in Chibok, have rejected those figures, claiming that 230 teenage students were taken and that 187 are still being held hostage.

The leader of Chibok's elders forum, Pogu Bitrus, told AFP that he had received information indicating the girls were trafficked into neighbouring Cameroon and Chad and sold as brides to insurgents for 2,000 naira ($12).

There was however no independent confirmation of this report.

The rain-soaked women protesters, who on Thursday met the senate president and speaker (head) of the lower house of parliament, said that they vowed before the politicians that they would resume their action if nothing was done in 24 hours.

"We have told the National Assembly that we are coming back if within 24 hours we do not see any concrete and visible action that is different from what we have seen so far," one of them, Obiageli Ezekwesili, said.

"We will come back. We are giving 24 hours. Tomorrow we will gather here at the same time 3:pm (1400 GMT)if there is no clear message as to the effect that our daughters have been found," said Ezekwesili, a former World Bank vice president, who broke down in tears several times during the protest.

Parents have voiced fury at the military's apparent rescue operation, accusing the security services of ignoring their daughters' plight.

One of the fathers of the kidnapped girls, Sambido Hosea, said they received no information about their daughters.

"The mothers are preparing to go into the bush. If the mothers go, we men will follow and we are not armed and you know what that means to these heartless people," Hosea told AFP, expressing the fear that the entire community might be wiped off in the process.

Ezekwesili, an ex-Nigerian cabinet member, who addressed the protesters, accused the military of having "no coherent search-and-rescue" plan.

A delegation of the senate, led by its president, is scheduled to meet President Goodluck Jonathan late Wednesday on rescue plans, one of the senators told AFP.

"We are going to tell the president the home truth that the government is not doing enough to rescue these girls," Babafemi Ojudu of the main opposition All Progressives Congress party said.

The meeting, to which some senators from the northeast region have been invited, is scheduled for 2100 GMT, he said.

Boko Haram's name translates as "Western education is forbidden", and it has repeatedly attacked schools during an insurgency aimed at creating a strict Islamic state in mainly Muslim northern Nigeria.

The Islamists have set schools on fire, massacred students in their sleep and detonated bombs at university campus churches, but a massive kidnapping specifically targeting girls is unprecedented.

Jonathan has faced scathing criticism over his handling of the Boko Haram conflict, which has already killed more than 1,500 people this year.

Speaking by phone from Chibok, a father of one of the kidnapped schoolgirls voiced hope that attention brought to his nightmare by protesters could make a difference.

"We are poor with no influence whatsoever, which we believe is the reason the government does not care about our girls," said the father, requesting anonymity.

"We believe if Nigerians, the high and the low, raise their voices from different quarters it will make the government sit up and do the right thing to free our girls."