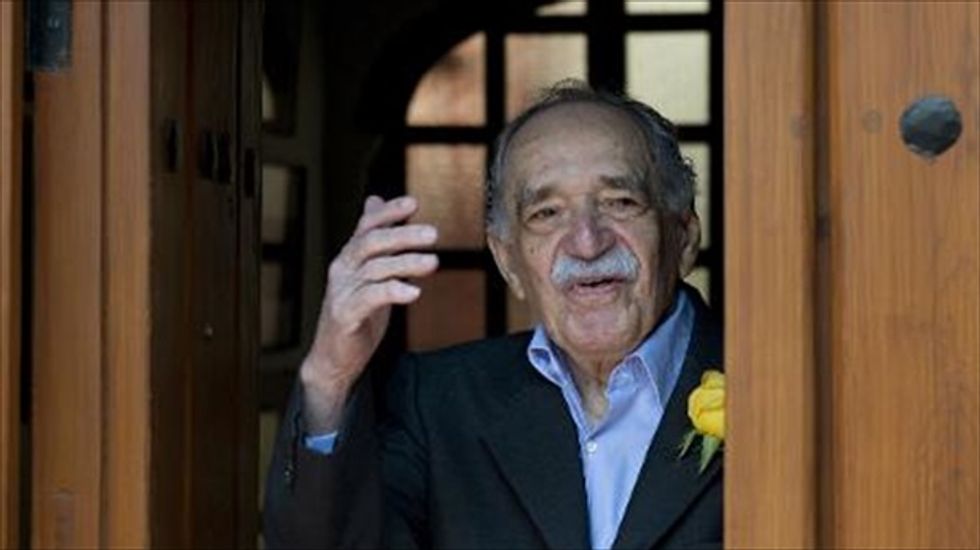 Nobel Literature prize-winning writer and journalist, Colombian Gabriel Garcia Marquez, waves at the door of his house on his 87th birthday, in Mexico City, on March 6, 2014 [AFP]

"The family has asked us not to disclose information about his state of health," the official told AFP on condition of anonymity.

Garcia Marquez, who made Mexico City his home more than three decades ago, was taken to the National Medical Science and Nutrition Institute in the south of the capital.

Mexican media reported that Garcia Marquez was hospitalized with pneumonia. El Universal said the writer was taken there at dawn.

Garcia Marquez made his last public appearance on March 6 when he came out of this house to greet journalists who visited him for his 87th birthday.

The author smiled, accepted gifts and posed for photographs, but he did not speak to reporters.

Winner of the 1982 Nobel literature prize, Garcia Marquez was a pioneer of the story-telling style known as magical realism, which he used to tell epic stories of love, family and dictatorship in Latin America.

Known affectionately as "Gabo," the author of "Love in the Time of Cholera" became the most read Latin American author in the world and the godfather of a literary movement that bore witness to a continent in turmoil.

Born March 6, 1927, in the village of Aracataca on Colombia's Caribbean coast, Garcia Marquez was the son of a telegraph operator.

He was raised by his grandparents and aunts in a tropical culture with a heritage colored by a mix of Spanish settlers, indigenous populations and black slaves. His grandfather was a retired colonel.

The exoticism and legends of his homeland inspired him to write a slew of short stories and novels, including his masterpiece, "One Hundred Years of Solitude," which was translated into 35 languages and sold more than 30 million copies.

The book, published in 1967, is a historical and literary saga about a family from the imaginary Caribbean village of Macondo between the 19th and 20th century.

The novel turned the man with the mustache and thick eyebrows into an international star.

His passion for writing began in the early 1960s, when he moved to Mexico with his longtime partner and mother of his two children, Mercedes Barcha, after meeting his good friend and Mexican writer Carlos Fuentes.

Garcia Marquez wore a white liqui-liqui, a traditional costume with a high collar from his native region, to receive his Nobel prize in Sweden in 1982.

The Nobel committee awarded him the prize "for his novels and short stories, in which the fantastic and the realistic are combined in a richly composed world of imagination, reflecting a continent's life and conflicts."