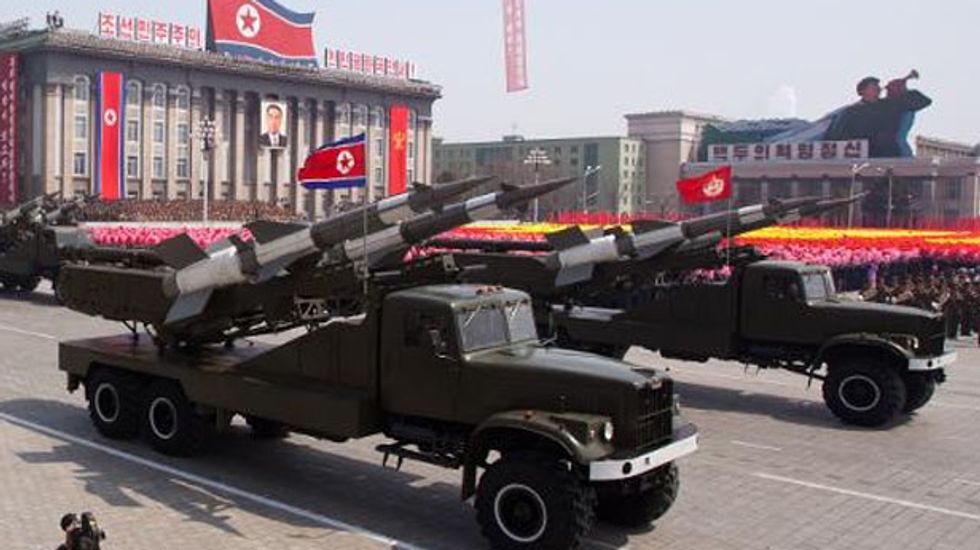 North Korea could well be preparing to carry out a fourth nuclear test, South Korea said Tuesday, citing increased activity at its main test site just days ahead of a visit to Seoul by US President Barack Obama.

"Our military is currently detecting a lot of activity in and around the Punggye-ri nuclear test site," defence ministry spokesman Kim Min-Seok told a press briefing.

Kim stressed that North Korea's nuclear weapons programme was at a stage where it could conduct a test "at any moment" once the order was given by the leadership in Pyongyang.

Kim declined to give details of the monitored activity, but cautioned that it may be no more than a "deception tactic" to raise tensions ahead of Obama's visit which is due to begin on Friday.

"We are thinking of possibilities that the North may stage a surprise nuclear test or just pretend to stage a nuclear test," Kim said.

Obama is visiting Seoul as part of an Asia tour, and there has been widespread speculation that the North may stage a provocation to coincide with the trip.

Kim said the South Korean and US militaries were closely sharing intelligence and Seoul's Joint Chiefs of Staff had set up a special task force in case Pyongyang goes ahead with an underground detonation.

On Monday, Pyongyang slammed Obama's upcoming trip as a "dangerous" move that would escalate military tension and bring the "dark clouds of a nuclear arms race" over the Korean peninsula.

Several analysts said they were sceptical that North Korea would carry out a test at the current time, and said Pyongyang was just seeking to rattle a few cages.

Professor Yang Moo-Jin of the University of North Korean Studies in Seoul, said a test now would risk permanently alienating the North's only major ally and chief economic benefactor, China.

"It would be a huge slap in the face for China and North Korea may not feel confident enough to deal with the backlash from Beijing," Yang said.

A nuclear test would extinguish any chance of a resumption of six-country talks on North Korea's nuclear programme that China has been pushing for.

Other parties to the stalled discussions -- most notably a sceptical South Korea and the US -- insist Pyongyang must first make a tangible step towards denuclearisation.

China said it was aware of the reports of a possible test and urged restraint.

"We call on all relevant parties to keep calm ... and stick to the goal of realising the denuclearisation of the Korean peninsula ... through dialogue," foreign ministry spokesman Qin Gang told a regular briefing.

Kim Yong-Hyun, a North Korean expert at DongGuk University, said the diplomatic fallout from another nuclear test "might be hard for the North to cope with".

"I think this is more likely North Korea posturing to get some international attention," Kim said.

The North warned at the end of March that it would not rule out a "new form" of nuclear test after the UN Security Council condemned its latest series of medium-range missile launches.

Experts saw this as a possible reference to testing a uranium-based device or a miniaturised warhead small enough to fit on a ballistic missile.

"If North Korea goes ahead with another nuclear test as it has publicly warned, it will be a game changer," South Korean Foreign Minister Yun Byung-Se said Monday.

Warning Pyongyang that it was playing an "unwinnable game" against the international community, Yun said the world would not tolerate a nuclear-armed North Korea.

Last year, the North restarted a plutonium reactor that it had shut down at its Yongbyon nuclear complex in 2007 under an aid-for-disarmament accord.

Pyongyang is currently believed to have enough plutonium for as many as six bombs, after using part of its stock for at least two of its three atomic tests to date.

It is still unclear whether the 2013 test used plutonium or uranium as its fissile material.

A basic uranium bomb is no more potent than a basic plutonium one, but the uranium enrichment path holds various advantages for the North, which has substantial deposits of uranium ore.

Uranium enrichment carries a far smaller footprint than plutonium and can be carried out using centrifuge cascades in relatively small buildings that give off no heat.