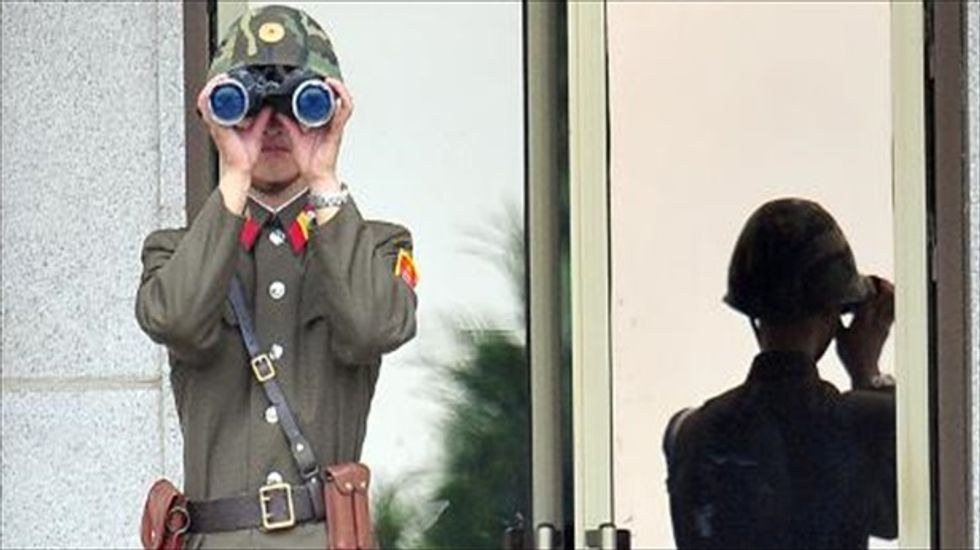 A North Korean soldier looks through binoculars at the South side across the Demilitarized zone (DMZ) dividing the two Koreas on July 27, 2013 [AFP]

North Korea said Friday it had been holding a 24-year-old U.S. tourist in custody for more than two weeks after he apparently ripped up his visa at immigration and demanded asylum.

The announcement, made in a brief despatch carried by the North's official KCNA news agency, came as US President Barack Obama wrapped up the first part of a two-day visit to South Korea.

The tourist, identified as "Miller Matthew Todd", had been taken into custody April 10 for "his rash behavior in the course of going through formalities for entry" into North Korea, KCNA said.

The report said he remained in detention and was under investigation.

U.S. State Department spokeswoman Jen Psaki said Washington was aware of the reports of the arrest of a U.S. citizen, but she had no additional information.

"We have been in touch with the embassy of Sweden about these reports," she told journalists, adding that "there's no greater priority to us than the welfare and safety of US citizens."

Washington has no diplomatic ties with Pyongyang, and the Swedish embassy there usually acts on its behalf in cases involving US citizens.

Bae was arrested in November 2012 and sentenced to 15 years' hard labour on charges of seeking to topple the government.

U.S. efforts to secure Bae's release have so far been unsuccessful, but Psaki said he had been visited by Swedish embassy representatives 11 times since his arrest, the last time being on April 18.

According to KCNA, Miller had a tourist visa, but tore it to pieces and shouted that "he would seek asylum" and had come to North Korea "after choosing it as a shelter."

Such an action constituted a "gross violation" of North Korean law, the agency said.

North Korea has in the past freed detained Americans after visits from high-level emissaries.

In 2011, a US delegation led by Robert King, the U.S. special envoy for North Korean human rights issues, secured the release of Eddie Jun Yong-Su, a California-based businessman, detained for apparent missionary activities.

In 2010 former U.S. president Jimmy Carter won plaudits when he negotiated the release of American national Aijalon Mahli Gomes, sentenced to eight years of hard labour for illegally crossing into the North from China.

On another mercy mission a year earlier in 2009, former president Bill Clinton won the release of U.S. television journalists Laura Ling and Euna Lee, jailed after wandering across the North Korean border with China.