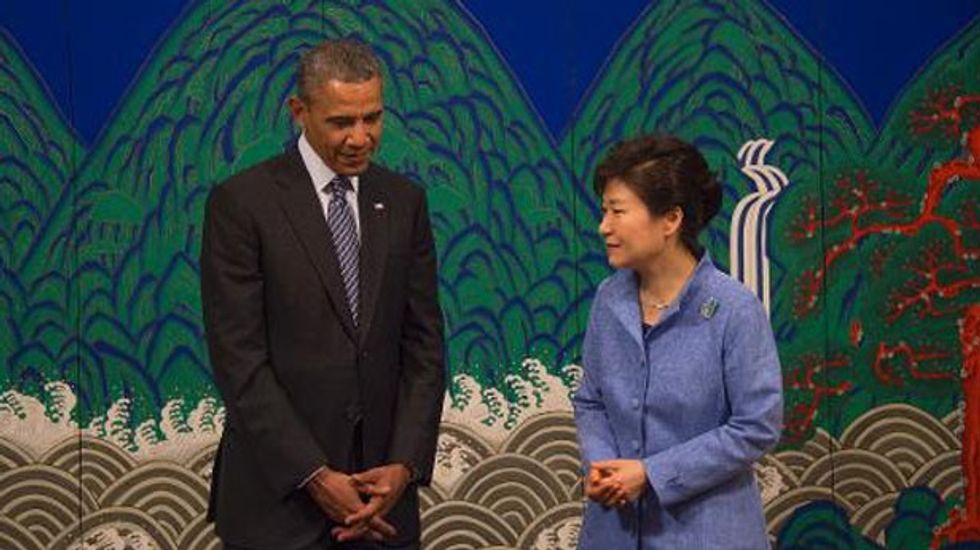 The Japanese wartime system of sex slavery was a "terrible" violation of human rights and its victims need to be heard, US President Barack Obama said Friday in Seoul.

Stepping into one of the most contentious issues in Northeast Asia, Obama said there needed to be an accounting of the wrongs perpetrated by Japanese Imperial troops before and during World War II when thousands of women were forced into prostitution.

"This was a terrible, egregious violation of human rights. Those women were violated in ways that even in the midst of war were shocking," he said.

"I think (Japanese) Prime Minister (Shinzo) Abe recognises this and certainly the Japanese people recognise that the past is something that has to be recognised honestly and fairly."

Despite formal apologies issued by the Japanese government, South Korea and other nations accuse Tokyo of failing sufficiently to atone for the "comfort women" pressed to service its troops during its brutal war of expansion.

While many Japanese accept the country's guilt, some senior politicians on the right -- including Abe -- have suggested that the issue is overblown, putting huge pressure on ties between Tokyo and Seoul.

Obama, who arrived in South Korea earlier Friday after a three-day state visit to Japan, said the two nations must find a way to move on.

"It is in the interests of both Japan and the Korean people to look forwards as well as backwards and to find ways in which the heartache and the pain of the past can be resolved."

A rising strain of nationalism in both countries over recent months has inflamed the row, with South Korean pressure groups in the United States erecting statues to former comfort women.

Washington finds it frustrating that its two major allies in the region are unable to resolve their issues and work together on other pressing issues, such as an increasingly strident China and Pyongyang's nuclear weapons programme.

The report echoed recent warnings from South Korea that the North might be planning a nuclear test to coincide with Obama's two-day visit.

"As has been said before, the interests today of the Korean and Japanese people so clearly converge," the US president said.

"You are both democracies; you both have thriving free markets; you both are cornerstones of a booming economic region. You both are strong allies and friends of the United States.

"My hope would be that we can honestly resolve some of these past tensions, but also keep an eye on the future."